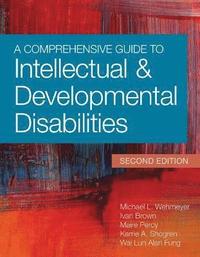 av Michael L Wehmeyer, Ivan Brown, Maire Percy, Karrie A Shogren, Wai Lun Alan Fung
Inbunden Engelska, 2017-03-30
1249
Köp
Spara som favorit
Skickas inom 10-15 vardagar.
Fri frakt inom Sverige för privatpersoner.
The trusted core disability textbook gets a comprehensive update in this second edition, now thoroughly revised to include all the critical topics today's professionals need to know about as they work with people who have disabilities. Brought to you by a new team of world-renowned experts and contributors, this volume fully prepares future educators, social workers, researchers, and clinicians to provide the best services and supports to children and adults across the life span. Tomorrow's professionals will discover what to do and how to do it as they prepare for their important work, and they'll refer to this user-friendly compendium year after year for information, insights, and answers. A cornerstone text for any course focused on developmental disabilities-and an essential reference for every in-service professional's library. THE IDEAL CORE TEXT FOR DEVELOPMENTAL DISABILITY COURSES: * Broad and deep, with thorough, up-to-date information on intervention, education, family roles, health issues, specific disabilities, and much more * Life-span-focused, with topics ranging from genetics and development to aging issues * Multidisciplinary, blending research and personal experiences of more than 70 esteemed authors from diverse fields * Immediately applicable, presenting both the facts and practical, real-world advice on meeting the individual needs of people with disabilities * Student-friendly, with learning objectives, instructive case stories, stimulating questions for reflection, and key Internet resources WHAT'S NEW: New co-editors and contributors * New and extensively updated chapters on critical topics, including AAC and technology, autism spectrum disorder, advocacy and self-advocacy, communication challenges, family issues, human development and genetics, legal and ethical considerations, and psychopharmacology
Visa hela texten

"The book discusses not only fundamental information about intellectual and other developmental disabilities but also critical topics that are often shrouded in misunderstanding such as cultural/linguistic differences, mental health, and sexuality issues." --James R Patton, Ed.D

Michael L. Wehmeyer, Ph.D. is Professor of Special Education; Director, Kansas University Center on Developmental Disabilities; and Senior Scientist, Beach Center on Disability, all at the University of Kansas. He has published more than 25 books and 250 scholarly articles and book chapters on topics related to self-determination, special education, intellectual disability, and eugenics. He is co-author of the widely used textbook Exceptional Lives: Special Education in Today's Schools, published by Merrill/Prentice Hall, now in its 7th Edition. His most recent book, co-authored with J. David Smith, is Good Blood, Bad Blood: Science, Nature, and the Myth of the Kallikaks, published by the American Association on Intellectual and Developmental Disabilities (AAIDD). Dr. Wehmeyer is Past President (2010-2011) of the Board of Directors for and a Fellow of AAIDD; a past president of the Council for Exceptional Children's Division on Career Development and Transition (DCDT); a Fellow of the American Psychological Association (APA), Intellectual and Developmental Disabilities Division (Div. 33); a Fellow of the International Association for the Scientific Study of Intellectual and Developmental Disabilities (IASSIDD); and former Editor-in-Chief of the journal Remedial and Special Education. He is a co-author of the AAIDD Supports Intensity Scale, and the 2010 AAIDD Intellectual Disability Terminology, Classification, and Systems of Supports Manual. Ivan Brown has worked in, and contributed to, the field of disabilities for the past 25 years. He began his work life as an elementary school teacher for 8 years before taking a position with Community Living Toronto, where he worked as a vocational counselor and community living support worker while completing his graduate studies in counseling psychology (M.Ed.) and special education (Ph.D.). In 1991, he took a position as Senior Research Associate with the Centre for Health Promotion, Department of Public Health Sciences, University of Toronto, where he managed a number of large research projects. Several of these addressed quality of life of children with disabilities, adults with developmental disabilities, seniors, and adolescents. He held appointments during the 1990s as Assistant Professor in the Departments of Occupational Therapy and Public Health Sciences, both at the University of Toronto, and taught both in the graduate health promotion program in the Department of Public Health Sciences and in the School of Early Childhood Education at Ryerson University in Toronto, which has a special focus on young children with special needs. Ivan is manager of the Centre of Excellence for Child Welfare, a national body for research and policy development in child welfare, to which he brings an important disability focus. The Centre is housed within the graduate Faculty of Social Work at the University of Toronto, in which Ivan holds an appointment of Associate Professor. Research in disability has been, and continues to be, a critical part of his ongoing work. Ivan has a strong history of community involvement in disability, serving on numerous government and community agency committees and boards, participating in research projects, and acting in leadership roles with several professional organizations. In particular, he was a longstanding member of the Board of Directors of the Ontario Association on Developmental Disabilities and served as its Chair for a 2-year period. In 2001, he was awarded this Association's highest honor, the Directors' Award of Excellence. He is a fellow of the International Association for the Scientific Study of Intellectual Disability and is a long-standing member of the American Association on Intellectual and Developmental Disabilities (formerly the American Association on Mental Retardation [AAMR]). Ivan has contributed substantially to the Canadian and international literature, particularly in the areas of quality of life and intellectual disabil