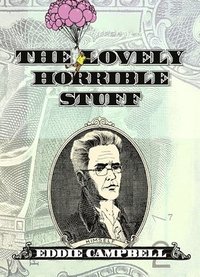 av Eddie Campbell
Inbunden Engelska, 2017-04-01
149
Köp
Spara som favorit
Skickas inom 5-8 vardagar.
Gratis frakt inom Sverige över 159 kr för privatpersoner.
Money makes the world go round, as they say... but HOW, exactly? Award-winning graphic novelist Eddie Campbell (From Hell, Alec) presents a fascinating journey into the wilderness of personal finance. With his trademark blend of research, anecdote, autobiography, and fantasy, Campbell explores how money underwrites human relationships, flowing all around us like the air we breathe - or the water we drown in. The result is a whimsical graphic essay, deeply grounded in Eddie's personal experiences with "the lovely horrible stuff," ranging from the imaginary wealth of Ponzi schemes and television pilots to the all-too-tangible stone currency of the Micronesian island of Yap. In a world where drawing corporate superheroes requires literally transforming oneself into a corporation (which is kept in a shoebox under the bed), we are in strange territory, indeed. Fortunately, Campbell's wry eye and vivid full-color artwork imbue the proceedings with real humanity, making The Lovely Horrible Stuff an investment that's worth every penny.
Visa hela texten

Publishers Weekly calls Eddie Campbell "one of the premier cartoonists of his generation." Campbell has been writing and drawing comics since 1974, and is best known for his collaborations with Alan Moore (From Hell, A Disease of Language) and Neil Gaiman (The Truth is a Cave in the Black Mountains), as well as for Alec, his tour-de-force autobiographical series that Booklist called "a high-water mark in the graphic novel's short history," and the 1200-page epic Bacchus. Forthcoming is Bizarre Romance (in collaboration with Audrey Niffenegger).