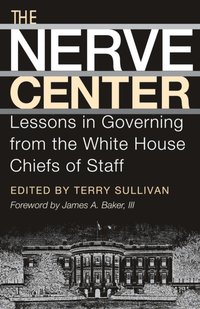 Lessons in Governing from the White House Chiefs of Staff

av Terry Sullivan, James A Baker
E-bok (PDF - DRM), Engelska, 2004-08-04
209
Ladda ned
Spara som favorit
Laddas ned direkt
Läs i vår app för iPhone, iPad och Android
Finns även som
Visa alla 1 format & utgåvor
In what James A. Baker III has called the worst job in Washington, the chief of staff orchestrates the presidents conduct of the U.S. government. He holds the unique responsibility to magnify the time, reach, and voice of the president of the United States. You need a filter, a person that you have total confidence in who works so closely with you that in effect he is almost an alter ego, Gerald Ford has said. In this volume, resulting from the Washington Forum on the Role of the White House Chief of Staff held in 2000 in Washington, D.C., twelve of the fifteen men who have held the office of chief of staff discuss among themselves and with a select group of participants the challenges, achievements, and failures of their time in that role. Their purpose is to find lessons in governing that will help future chiefs of staff prepare to assume the office and organize the staffs they will lead. These pages of frank and uncensored discussion present in straightforward question-and-answer format the voices of the chiefs of staff themselves concerning the transition from campaign to governance, with its reorganization and refocusing of the presidents team, the reelection drive four years later, and eventually, the closing out of an administration. The group also addresses the place of the White House chief of staff within the larger governing community of the Executive Branch, Congress, interest groups, and the press. The American White House sits at the nerve center of world history, and at the core of this nerve center, a massive bureaucratic operation exists to process the flow of information and policy. The White House chief of staff manages that operation. So important has that office become, that to ignore its requirements risks presidential fate itself and indeed, the fate of the republic.
Visa hela texten