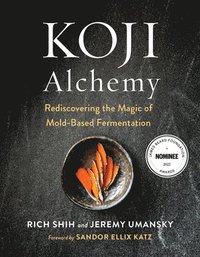 Rediscovering the Magic of Mold-Based Fermentation

av Jeremy Umansky, Rich Shih
Inbunden Engelska, 2020-06-04
269
Köp
Spara som favorit
Skickas inom 5-8 vardagar.
Fri frakt inom Sverige för privatpersoner.
"Koji Alchemy is empowering and does much to open the door to further creativity and innovation. . . . I can't wait to see and taste the next wave of koji experimentation it inspires." Sandor Katz (author of The Art of Fermentation, James Beard Award Winner, and New York Times bestseller) Koji Alchemy is the first book devoted to processes, concepts, and recipes for fermenting foods with koji, the microbe behind the delicious, umami flavors of soy sauce, miso, mirin, and so many of the ingredients that underpin Japanese cuisine. Chefs Jeremy Umansky and Rich Shih leaders on the culinary power of this unique ingredient deliver a comprehensive look at modern koji use around the world. Using it to rapidly age charcuterie, cheese, and other ferments, they take the magic of koji to the next level, revolutionising the creation of fermented foods and flavour profiles for both professional and home cooks. Koji Alchemy includes: A foreword by best-selling author Sandor Katz (The Art of Fermentation) Cutting-edge techniques on koji growing and curing Extensive information on equipment and setting up your kitchen More than 35 recipes for sauces, pastes, ferments, and alcohol
Visa hela texten

"When I first met and became friends with Jeremy Umansky in 2014, he exposed me to what he had been working on with regard to koji. It was the kind of culinary awakening that opened my eyes to what is possible with food in order to create deliciousness, and this has carried over into everything that I do in the kitchen to this day. I couldn't be more excited for the knowledge in his and Rich Shih's beautiful book to be widely available. Koji Alchemy will change you."--Kevin Sousa, chef and owner, Superior Motors "What an extraordinary book Koji Alchemy is. I leapt headfirst into the section on vinegar, but from there couldn't resist discovering all the other ways that Shih and Umansky expound on the flavour impact of koji. It's a book for ingredient geeks, for sure (which I mean as a compliment), but written engagingly enough to appeal to anyone with a serious interest in food. My culinary mind is blown."--Angela Clutton, author of The Vinegar Cupboard "They say a gram of koji contains millions of spores. Shih and Umansky equal that with insights, bringing scientific understanding to koji's magical powers of transformation (without spoiling any of the magic). Koji Alchemy is an immensely informative read."--Dan Barber, chef/co-owner, Blue Hill and Blue Hill at Stone Barns; author of The Third Plate "Science is a very useful resource for understanding food, and, very importantly, it shows us how to make better food. This book succeeds in 'translating' the language of science and its practical applications to everyday users. Exploiting and harnessing the effects that microorganisms have on food is a great tool that any cook can add to their repertoire, and Koji Alchemy will show you how. I hope Merriam-Webster adds the word 'kojify' to the dictionary soon."--Francisco Migoya, head chef, Modernist Cuisine "Rich and Jeremy have done an amazing job in creating an indispensable manual for both home cooks and pro chefs. Koji Alchemy offers a fresh set of transformative cooking fundamentals and a master class on fermentation."--Rick Tramonto, executive chef and vice president of culinary operations, Tramonto Cuisine Group "Rich and Jeremy have dedicated years to researching and experimenting with both traditional and utterly novel uses for koji. With Koji Alchemy, they open their notebooks to the rest of us, sharing their deep knowledge and infectious enthusiasm for this remarkable mold. This book, at once comprehensive and approachable, will prove invaluable to any curious cook looking to make more flavorful food, reduce kitchen waste, or experiment at the frontier of an exciting world of fermentation."--Dan Souza, editor-in-chief, Cook's Illustrated "Rich and Jeremy have dedicated their lives to the art of making koji, and it shows very evidently in their work. Koji Alchemy is one of the most comprehensive pieces of literature regarding this amazing mold in the industry today. This book is a tool every kitchen should be using."--Chef Ryan Poli "Like a magician revealing their tricks, Koji Alchemy has lifted the veil on the complex nature of some of the world's most beloved foods. The authors brilliantly demystify the 'alchemy, ' giving the reader a straightforward view into the world of koji's secrets. Never before has a book broken down the building blocks of koji and its products so completely and in such a useful way in the kitchen."--Kyle Connaughton, chef and owner, SingleThread Farms "It's not every day that deeply passionate, creative, and collaborative people take on the demystification of a revered ingredient. But herein lies just that: a truly educational, comprehensive, and delicious exploration of one of the most versatile molds out there. So grateful for this book."--Cortney Burns, chef; author of Nourish Me Home and coauthor of Bar Tartine "In an ever-evolving culinary world, Koji Alchemy will help define the next generation

Rich Shih is one of the leading culinary explorers of koji and miso in the United States. He's an in-demand food preservation consultant who helps chefs to build their larders and leverage fermentation to decrease waste, sharing ideas with which to experiment. Shih offers both public and private workshops across the United States to share koji knowledge. In addition to working with koji and fermentation, Shih is the Exhibit Engineer for the Museum of Food and Drink (MOFAD) based in New York City. His blog, OurCookQuest, provides a welcome environment for cooks of all experience levels to learn, share knowledge, and exchange ideas. Jeremy Umansky, along with Allie La Valle-Umansky and Kenny Scott, is a chef and owner of Larder: A Curated Delicatessen & Bakery, a from-scratch Eastern European deli in Cleveland, Ohio. Larder focuses on the use and promotion of local and wild foods and was a semifinalist for the 2019 James Beard Foundation award for Best New Restaurant in America. Umansky is as a foremost expert on koji and fermented, preserved, and foraged foods and works as a consultant on the use and creation of these foods and ingredients. Articles written by Umansky or about his work have appeared in Food & Wine, Bon Appetit, and Saveur, among other outlets.