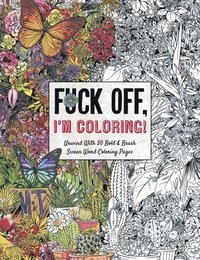 av Dare You Stamp Co
Häftad Engelska, 2016-09-06
120
Köp
Spara som favorit
Color the shit out of this new stress-relieving swear word adult coloring book! With daily stresses like annoying coworkers, red-faced bosses, endless traffic, and whatever shit you have going on at home, sometimes all you need to tell everyone to "fuck off." Now you can say it in color! Relieve some stress with easy and beautiful art--that also happens to feature your favorite profanities. Feel the "zen" wash over you as you color in or outside the lines however you damn well please. Take your defiance up a notch with more complex patterns, or take the easy route when you unwind. Do whatever the fuck you want.
Visa hela texten

The Dare You Stamp Co. was founded in 1776 when noted Philadelphian Jeremiah Dare was hired by the not-yet Founding Fathers to print draft copies of the Declaration of Independence. When the documents arrived at Independence Hall, an unfortunate typo read "When in the Curse of human events..." So irate was George Washington that he said "The foolish and wicked practice of profane cursing and swearing is a vice so mean and low that every person of sense and character detests and despises it." Dare's instinct was to simply reply, "Fuck You." Today, the Dare You Stamp Co. continues on as a belligerent subset of Cider Mill Press.