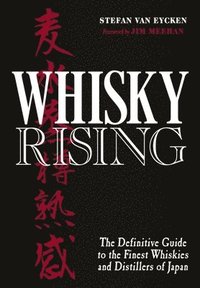 The Definitive Guide to the Finest Whiskies and Distillers of Japan

av Stefan Van Eycken
Inbunden Engelska, 2017-04-07
259
Bevaka
Spara som favorit
Tillfälligt slut – klicka "Bevaka" för att få ett mejl så fort boken går att köpa igen.
"There isn't another guide on the market like it."--Jim Meehan, author of The PDT Cocktail Book. The first, most definitive guide to the exciting revolution happening in the world of Japanese whisky! "Japanese single malts have achieved cult status around the world," wrote Eric Asimov in the New York Times. Indeed, Japanese whiskies have become some of the most sought after and highly valued whiskies in the world. They have blended and melded traditional Scotch and American methods with new ideas, and imbued the whisky with exotic flavors from local Japanese woods to make a unique and signature product that not only rings true of whisky, but also speaks to Japanese terroir. In international competitions they have bested the traditional producer, and they have become absolutely the object of affection in the distilled spirits world! Now here in Whisky Rising, whisky authority and Japanese whisky expert Stefan Van Eycken takes you on a guided tour to some of the most coveted whiskies in the world. This elegant book includes: *Fascinating interviews and profiles with the most celebrated distillers and blenders *Behind-the-scenes look into past and present distilleries *An insider's guide to the best whisky bars *How to drink whisky properly and cocktail recipes *Tasting notes and reviews of THE best Japanese whiskies
Visa hela texten

Stefan Van Eycken grew up in Belgium and Scotland and moved to Japan in 2000. He's the editor of Nonjatta (www.nonjatta.com), the foremost online resource on Japanese whisky, regional editor (Japan) of Whisky Magazine UK, and regular contributor to Whisky Magazine Japan and France. He's also the man behind the 'Ghost Series', an ongoing series of bottlings of rare Japanese whiskies, and 'Spirits for Small Change', a bi-annual whisky charity event. He's been on the Japanese panel of the World Whiskies Awards since 2012.