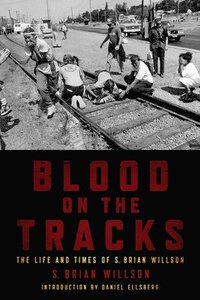 Blood On The Tracks

The Life and Times of S. Brian Willson

av S Brian Willson
Häftad Engelska, 2011-06-23
259
Köp
Spara som favorit
Skickas inom 7-10 vardagar.
Fri frakt inom Sverige för privatpersoner.
After serving in the Vietnam War, S. Brian Willson became a radical, nonviolent peace protester and pacifist, and this memoir details the drastic governmental and social change he has spent his life fighting for. Chronicling his personal struggle with a government he believes to be unjust, Willson sheds light on the various incarnations of his protests of the U.S. government, including the refusal to pay taxes, public fasting, and, most famously, public obstruction. On September 1, 1987, Willson was run over by a U.S. government munitions train during a nonviolent blocking action in which he expected to be removed from the tracks. Providing a full look into the tragic event, Willson, who lost his legs in the incident, discusses how the subsequent publicity propelled his cause toward the national consciousness. Now, 23 years later, Willson tells his story of social injustice, nonviolent struggle, and the so-called American way of life.
Visa hela texten

Bloggat om Blood On The Tracks