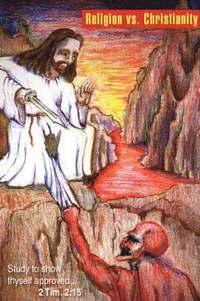 av Steven Channing
Inbunden Engelska, 2008-04-01
259
Köp
Spara som favorit
Skickas inom 10-15 vardagar.
Fri frakt inom Sverige för privatpersoner.
Finns även som
Visa alla 1 format & utgåvor
It has been said that an 8 year old should be able to understand all but about 80 of the terms within the Holy Bible. So, why then, is it so difficult for an adult? With so many bible versions out there, is there a right or a wrong one? Who is Jesus and what did he have to say about such issues? Who is the Holy Spirit which is spoken of by Christians? And, as of touching upon Christians, who are they? What do they believe in? Where are they right? Where are they wrong? Are there doctrines which won't hold up?

Inside of this book are the foundational building blocks to finding out the truth in these questions and many more. Are we all under the same God, but just serving him in different ways; or, for that matter, who, or what, is this God? Every religion has its' own version. Even the Atheists could learn something from this book.

This book should help to expose hypocrisy for what it truly is. If you have ever had any questions about how to deal with those who would try to impress their religion upon you, then read this book. It will start to expose the hidden truths in 'Religion versus Christianity'. The things which the people of this world do not want you to know.

This book is not propaganda, but rather, a search for the truth behind religious belief systems. Years of research are at your fingertips, you now have a guide to get you started.

What you don't know can hurt you, but what you think that you know, may be worse yet.
Visa hela texten