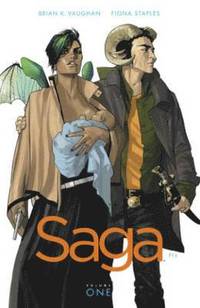 av Brian K Vaughan, Fiona Staples
(11 röster)  |  Läs 1 recension
Häftad Engelska, 2012-10-23
111
Köp
Spara som favorit
Skickas inom 5-8 vardagar.
Fri frakt inom Sverige över 159 kr för privatpersoner.
Winner of the 2013 Hugo award for Best Graphic Story! When two soldiers from opposite sides of a never-ending galactic war fall in love, they risk everything to bring a fragile new life into a dangerous old universe. From New York Times bestselling writer Brian K. Vaughan (Y: The Last Man, Ex Machina) and critically acclaimed artist Fiona Staples (Mystery Society, North 40), Saga is the sweeping tale of one young family fighting to find their place in the worlds. Fantasy and science fiction are wed like never before in this sexy, subversive drama for adults. This specially priced volume collects the first six issues of the smash-hit series The Onion A.V. Club calls "the emotional epic Hollywood wishes it could make." Voted one of the top graphic novels of the year by the NYT, IGN, the Examiner, and SF Weekly. Voted Best Comic of the year by MTV Geek and Best New Series by Paradox Comics. Voted a finalist in the GoodReads Best GN of 2012 contest. Named one of Time Magazine's top 10 graphic novels for 2013
Visa hela texten

BOOKLIST (STARRED) -- Vaughan, writer of the hugely successful Y: The Last Man , isn't one to think small. In this opener to his ambitious new series, bits of sf space opera and classic fantasy mesh in setting a sprawling stage for an intensely personal story of two lovers, cleverly narrated by their newborn daughter. Though recently soldiers from opposite sides of a massive intergalactic war, moth-winged Alana and ram-horned Marko simply want peace and anonymity to raise their daughter (an abomination to the powers that be) away from conflict and hatred. Vaughan's whip-snap dialogue is as smart, cutting, and well timed as ever, and his characters are both familiar enough to acclimate easily to and deep enough to stay interested in as their relationships bend, break, and mend. While Vaughan will be the star power that attracts readers, do-it-all artist Staples is going to be the one who really wows them. Her character designs dish out some of the best aliens around, the immersive world-crafting is lushly detailed and deeply thought through, and the spacious layouts keep the focus squarely on the personal element, despite the chaotic cosmos they inhabit. Add another winner to Vaughan's stable of consistently epic, fresh, and endearing stories.