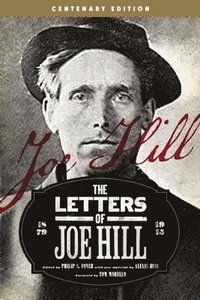 The Letters Of Joe Hill

av Joe Hill, Philip S Foner
Häftad Engelska, 2016-01-07
209
Köp
Spara som favorit
The legend of IWW activist and songwriter Joe Hill, brought to life through his letters, songs and writings. Radical songwriter and organiser Joe Hill was murdered by the capitalist state in 1915, but his songs continue to inspire working-class activists and musicians. In The Letters of Joe Hill, assembled by radical historian Philip Foner with new material by Alexis Buss, readers are provided a window into the political reflections and personal struggles behind Hill's legend.
Visa hela texten

Joe Hill was a Swedish-American labor activist, songwriter, and member of the Industrial Workers of the World (IWW, also known as the "Wobblies") Philip S. Foner was one of the most prominent Marxist historians in the United States. A prolific author and editor, he tirelessly documented the lives of workers, African Americans, and political radicals. Shut out of academic employment for a quarter century because of his political affiliations,