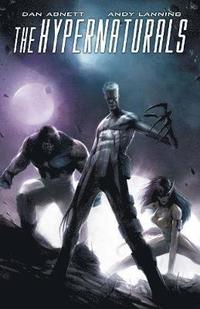 av Dan Abnett, Andy Lanning
Häftad Engelska, 2013-03-05
169
Köp
Spara som favorit
Specialorder (osäker tillgång). Skickas inom 11-20 vardagar.
Fri frakt inom Sverige för privatpersoner.
In the far future... A UNIVERSE TREMBLES. It is the far future; the human race has finally colonized the galaxy, preserving an era of prosperity that's only possible because of The Hypernaturals. They're a celebrated, galaxy-wide superhero task force that keeps the peace. That is, until they all mysteriously vanish. Now, as the galaxy teeters on the brink of chaos, it's up to a group of retired and long forgotten Hypernaturals -- and their novice recruits -- to save the galaxy from complete destruction. Dan Abnett and Andy Lanning, the superstar writing duo behind ANNIHILATION and THE LEGION, launch an all-new original graphic novel series that takes cosmic super-heroes to a new frontier.
Visa hela texten

Dan Abnett and Andy Lanning are frequent collaborators, known for their work for Marvel Comics, including the ANNIHILATION series and various X-MEN titles as well as DC Comics' relaunch of the Legion of Super-Heroes. Dan Abnett is also known for his Warhammer Fantasy and Warhammer 40,000 novel and graphic novel series, which have sold over 1.5 million copies. In addition to his writing partnership with Dan Abnett, Andy Lanning is an artist and inker working on top comic book titles.