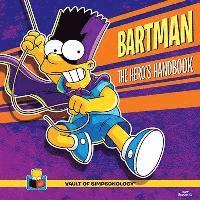 av Matt Groening
Inbunden Engelska, 2016-04-05
309
Köp
Spara som favorit
From the third story belfry at the First Church of Springfield to the polluted dock pilings at the South Street Squidport to the twin cooling towers of the nuclear power plant, one lone sentry stands watch over his city- Springfield's very own Dark Mite-Bartman! But you say you have a town, village, or rural farm district that is need of a protector, too? Then let the Purple Paladin guide you through the ins and outs of keeping your hometown safe both day and night! Look to the skies . . . and in this book! Bartman has come to your rescue to point out the supplies you'll need to meet the demands of any and every superhero!
Visa hela texten

Matt Groening is the creator of the longest-running comedy in television history...The Simpsons. It exploded into a cultural phenomenon in 1990 and has remained one of the most groundbreaking and innovative entertainment franchises, recognizable throughout the world. He followed it with his creation of the hit sci-fi series Futurama, currently one of the top-rated shows on Comedy Central. As a cartoonist, Groening began his "Life in Hell" weekly comic strip series in the 1980s, which he concluded in 2012. He lives in Southern California.