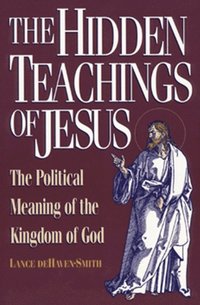 The Political Meaning of the Kingdom of God

av Lance Dehaven-Smith
E-bok (EPUB - DRM), Engelska, 2001-10-15
159
Ladda ned
Spara som favorit
Laddas ned direkt
Läs i vår app för iPhone, iPad och Android
The author of Conspiracy Theory in America presents a radical new view of the person of Jesus and the message of social reform underlying his teachings. Based on the premise that Jesus could not speak his thoughts openly without running afoul of the authorities, political philosopher Lance deHaven-Smith demonstrates how Jesus sought to dismantle worldly systems of command and status and replace them with a society governed by a spirit of holiness. The Hidden Teachings of Jesus also explores how Jesus' prophecies are being fulfilled in the modern era. Huge systems of power, privilege, and acquisition have arisen, but so too has a global public opinion which bristles at oppression and demands love and respect for every living thing. In this work, Lance deHaven-Smith points to a spirit of holiness emerging worldwide to dismantle power and status in abusive families, autocratic corporations, tyrannical governments, and many other areas of life. This spirit, he suggests, can bring about the real kingdom of God, the divine order Jesus urged his followers to establish here on earth.
Visa hela texten