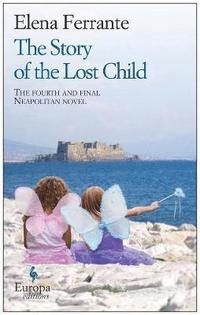 The Story of the Lost Child

av Elena Ferrante
(15 röster)  |  Läs 1 recension
Häftad Engelska, 2015-09-17
169
Köp
Spara som favorit
Finns även som
Visa alla 1 format & utgåvor
One of the major publishing events of 2015, this dazzling saga of two women - the brilliant Elena and the fiery, uncontainable Lila - firmly establishes the Neapolitan Quartet as perhaps the most significant work to date of the 21st century. Life's great discoveries have been made, it's vagaries and losses suffered. But, throughout it all, their friendship remains the gravitational centre of their lives. The unmissable finale to a great literary achievement.
Visa hela texten

Longlisted for the 2016 MAN BOOKER INTERNATIONAL PRIZE Named TIME Magazine's #1 Book in it's "10 Best Fiction Books of 2015" list Named one of the "10 Best Fiction Books of 2015" by The New York Times Book ReviewNamed one of the "10 Best Fiction Books of 2015" by People Magazine Featured in the Wall Street Journal's list of "15 Books to Read This Fall" Included as one of "30 blockbuster novels to look out for this fall" by Entertainment Weekly Listed as one of Publisher Weekly's "Most Anticipated Books of Fall 2015" Included in the Kirkus list of "21 Must-read Fall books" Featured as one of the New York Times Book Review's "100 Notable Books of 2015" Praise for The Story of the Lost Child "Dazzling...stunning...an extraordinary epic." --Michiko Kakutani, The New York Times "It's spectacular, but you will only realize how spectacular The Story of the Lost Child is if you do not cheat. You must read the three earlier (also superb) Neapolitan Novels or the perfect devastation wrought by the conclusion of this last novel will be lost on you." --Maureen Corrigan, NPR Fresh Air "It is the exploration of the women's mental underworld that makes the book so singular an achievement in feminist literature; indeed, in all literature." --Joan Acocella, The New Yorker "This is Ferrante at the height of her brilliance."--Elissa Schappell, Vanity Fair "Ms. Ferrante has in fact, for more than 20 years, written about female identity with a heft and sharpness unmatched by anyone since Doris Lessing."--The Wall Street Journal "What words do you save? Here's your chance to bring them out, like the silver for the wedding of the first-born: genius, tour de force, masterpiece. They apply to the work of Elena Ferrante, whose newly translated novel "The Story of the Lost Child" is the fourth and final one of her magnificent Neapolitan quartet, a sequence which now seems to me, at least within all that I've read, to be the greatest achievement in fiction of the post-war era."--Charles Finch, The Chicago Tribune "We are dealing with masterpieces here, old-fashioned classics, filled with passion and pathos. [...] The sheer power of her books is a challenge to the chilly, dour craftsmanship of too many 21st century literary novels."--Joe Klein, TIME Magazine "The saga is both comfortingly traditional and radically fresh, it gives readers not just what they want, but something more than they didn't know they craved...through this fusion of high and low art, Ms. Ferrante emerges as a 21st-century Dickens."--The Economist"Ferrante's accomplishment in these novels is to extract an enduring masterpiece from dissolving margins, from the commingling of self and other, creator and created, new and old, real and whatever the opposite of real may be. [...] Ferrante's voice is very much her own, but it's force is communal. Perhaps her quartet should be seen as one of the first great works of post-authorial literature."--Judith Shulevitz, The Atlantic "Ferrante [. . .] adumbrates the mysterious beauty and brutality of personal experience."--Rachel Cusk, The New York Times Book Review"[. . .] with her new novel, "The Story of the Lost Child," Ferrante has written what I'd call a "city book," a knowing and complex tale that encompasses an entire metropolis. The breadth of vision makes this final installment feel like the essential volume."--John Domini, The Washington Post "This stunning conclusion further solidifies the Neapolitan novels as Ferrante's masterpiece." --Publishers Weekly (starred review) "Ferrante has created a mythic portrait of a female friendship in the chthonian world of postwar Naples." --Kirkus Reviews (starred review) "Word of mouth launched this series, glowing reviews helped, and, eventually, a publishing

Elena Ferrante was born in Naples. She is the author of The Days of Abandonment (Europa, 2005), Troubling Love (Europa, 2007), and The Lost Daughter (Europa, 2009). Her Neapolitan novels include My Brilliant Friend, The Story of a New Name, Those Who Leave and Those Who Stay, and the fourth and final book in the series, The Story of the Lost Child. Ann Goldstein is an editor at The New Yorker. Her translations for Europa Editions include novels by Amara Lakhous, Alessandro Piperno, and Elena Ferrante's bestselling My Brilliant Friend. She lives in New York.