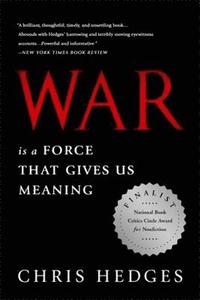 War Is a Force that Gives Us Meaning

av Chris Hedges
Häftad Engelska, 2014-04-08
179
Köp
Spara som favorit
Skickas inom 3-6 vardagar.
Fri frakt inom Sverige för privatpersoner.
Finns även som
Visa alla 4 format & utgåvor
As a veteran war correspondent, Chris Hedges has survived ambushes in Central America, imprisonment in Sudan, and a beating by Saudi military police. He has seen children murdered for sport in Gaza and petty thugs elevated into war heroes in the Balkans. Hedges, who is also a former divinity student, has seen war at its worst and knows too well that to those who pass through it, war can be exhilarating and even addictive: It gives us purpose, meaning, a reason for living."Drawing on his own experience and on the literature of combat from Homer to Michael Herr, Hedges shows how war seduces not just those on the front lines but entire societies,corrupting politics, destroying culture, and perverting basic human desires. Mixing hard-nosed realism with profound moral and philosophical insight, War Is a Force that Gives Us Meaning is a work of terrible power and redemptive clarity whose truths have never been more necessary.
Visa hela texten

Bloggat om War Is a Force that Gives Us Meaning

Chris Hedges is a Pulitzer Prize-winning journalist. He spent nearly two decades as a correspondent in Central America, the Middle East, Africa, and the Balkans, with fifteen years at the New York Times. A former fellow at The Nation Institute, he is the author of numerous bestselling books, including Empire of Illusion Death of the Liberal Class War is a Force that Gives Us Meaning and Days of Destruction, Days of Revolt, which he co-wrote with Joe Sacco. He writes a weekly column for the online magazine Truthdig. He lives in Princeton, New Jersey.