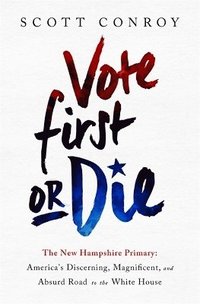 av Scott Conroy
Inbunden Engelska, 2017-04-27
249
Köp
Spara som favorit
Specialorder (osäker tillgång). Skickas inom 11-20 vardagar.
Fri frakt inom Sverige för privatpersoner.
American politics is not just a combination of high ideals and low cunning. It is also the story of thousands of local influencers, fixers, activists, and run-of-the-mill voters who shape the destinies of candidates. It's about the flawed and ambitious people who become candidates and must first grind it out for one vote at a time, if they want to ascend to the nation's highest office. Nowhere is this more true, and more carefully preserved, than in the state of New Hampshire. Utterly atypical of the country as a whole, New Hampshire has nonetheless afforded itself the status of the beacon of American democracy. New Hampshire has, by law, been the first state to cast its votes in the presidential primaries since 1920. Between that year and 1992, no one became president without first winning the New Hampshire primary. Since then, every commander-in-chief has finished in the top two, and the state has retained its clout in the twenty-first century. A win in New Hampshire is said by statisticians to boost a candidate's chances nationwide by twenty-seven percent. For that reason, the state is also often the graveyard of political ambitions: the list of sitting presidents whose terms ended with primary challenges launched from New Hampshire's granite rocks includes Harry Truman and Lyndon Johnson. New Hampshire has also ruined the White House ambitions of a long list of well-known, well-funded challengers who couldn't figure out how to win it the hard way. Scott Conroy followed the 2016 campaign up and down the state of New Hampshire and used that experience to uncover the peppery local officials, wiley operatives, wide-eyed activists, and complicated handlers who have determined the state's primary outcomes for generations. Through the eyes of these sometimes anonymous but always deeply influential characters, he reveals the workings of American presidential politics at a point in the campaign when the White House is still a distant dream, and the votes that matter most can be found in far-flung hamlets like Dixville Notch, Berlin and Wolfeboro.
Visa hela texten

"Scott Conroy has produced a thoughtful, engaging and at times hilarious deep dive into the political soul of America's first primary state. Topical in any era, Vote First or Die is particularly relevant in understanding the roiling discontents of Granite Staters that gave rise to Donald Trump's first-ever electoral victory." --Robert Draper, author of Do Not Ask What Good We Do: Inside The House of Representatives and Dead Certain: The Presidency of George W. Bush "Conroy can sting nicely...not letting anyone come out unscathed. ...A quirky, well-observed account of how electoral politics works."--Kirkus Reviews "As a reporter who chronicled my first New Hampshire primary in 1980, I love Scott Conroy's rollicking appreciation of the crown jewel of American democracy. Equally compelling and often funny are Conroy's anecdotes from the NH campaigns that he covered from John McCain to a fellow named Trump." --Walter Shapiro, columnist for Roll Call and author of One-Car Caravan: On the Road with the 2004 Democrats before America Tunes In "A mix of Bill Bryson and Mark Leibovich-affectionate, hard-headed, laugh-out-loud funny, and always deeply informed. New Hampshire is the perfect stage for Scott Conroy's safari through the strange magic and frailty of a presidential campaign." --Evan Osnos, author of Age of Ambition: Chasing Fortune, Truth, and Faith in New China

Scott Conroy is the co-creator and executive producer of Embeds on Verizon's Go90 platform. Previously, he worked with Vice to launch its nightly news show on HBO. He is coauthor of Sarah from Alaska and created and directed New Hampshire, a seven-part Huffington Post original documentary series about life on the 2016 trail.