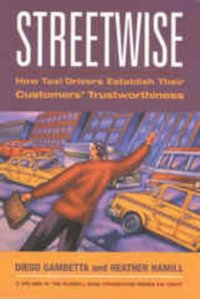 av Gambetta Diego Gambetta, Hamill Heather Hamill
E-bok (PDF - DRM), Engelska, 2005-06-30
8518
Ladda ned
Spara som favorit
Ladda ned och läs i en e-boksläsare. Tips på appar
A taxi driver's life is dangerous work. Picking up a bad customer can leave the driver in a vulnerable position, and erring even once can prove fatal. To protect themselves, taxi drivers must quickly and accurately assess the trustworthiness of complete strangers. In Streetwise, Diego Gambetta and Heather Hamill take this predicament as a prototypical example of many trust decisions, where people must act on limited information and judge another person's trustworthiness based on signs that may or may not be honest indicators of that person's character or intent. Gambetta and Hamill analyze the behavior of cabbies in two cities where driving a taxi is especially perilous: New York City, where drivers have been the targets of frequent and violent robberies, and Belfast, Northern Ireland, a divided metropolis where drivers have been swept up in the region's sectarian violence. Based on in-depth ethnographic research, Streetwise lets drivers describe in their own words how they seek to determine the threat posed by each potential passenger. The drivers' decisions about whom to trust are treated in conjunction with the &quotesign-management&quote strategies of their prospective passengers-both genuine passengers who try to persuade drivers of their trustworthiness and the villains who mimic them. As the theory that guides this research suggests, drivers look for signs that correlate closely with trustworthiness but are difficult for an impostor to mimic. A smile, a business suit, or a skullcap alone do not reassure drivers, as any criminal could easily wear them. Only if attached to other signs-a middle-aged woman, a business address, or a synagogue-are they persuasive. Drivers are adept at deciphering deceitful signals, but trickery is occasionally undetectable, so they must adopt defensive strategies to minimize their exposure to harm. In Belfast, where drivers are locals and often have histories of paramilitary involvement, &quotemacho&quote posturing often serves to deter would-be criminals, while New York cabbies, mostly immigrants who view themselves as outsiders, try simply to minimize the damage from attacks by appeasing robbers and carrying only small amounts of cash. For most people, erring in a trust decision leads to a broken heart or a few dollars lost. For cab drivers, such an error could mean losing their lives. The way drivers negotiate these high stakes offers us vivid insight into how to determine another person's trustworthiness. Written with clarity and color, Streetwise invites the reader to ride shotgun with cabbies as they grapple with a question of relevance to us all: which signs of trustworthiness can we really trust? A Volume in the Russell Sage Foundation Series on Trust
Visa hela texten