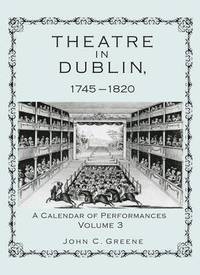 A Calendar of Performances

av John C Greene
Inbunden Engelska, 2012-01-08
1269
Köp
Spara som favorit
Skickas inom 7-10 vardagar.
Gratis frakt inom Sverige över 159 kr för privatpersoner.
Finns även som
Visa alla 8 format & utgåvor
Theatre in Dublin,1745-1820: A Calendar of Performances is the first comprehensive, daily compendium of more than 18,000 performances that took place in Dublin's many professional theatres, music halls, pleasure gardens, and circus amphitheatres between Thomas Sheridan's becoming the manager at Smock Alley Theatre in 1745 and the dissolution of the Crow Street Theatre in 1820. The daily performance calendar for each of the seventy-five seasons recorded here records and organizes all surviving documentary evidence pertinent to each evening's entertainments, derived from all known sources, but especially from playbills and newspaper advertisements. Each theatre's daily entry includes all preludes, mainpieces, interludes, and afterpieces with casts and assigned roles, followed by singing and singers, dancing and dancers, and specialty entertainments. Financial data, program changes, rehearsal notices, authorship and premiere information are included in each component's entry, as is the text of contemporary correspondence and editorial contextualization and commentary, followed by other additional commentary, such as the many hundreds of printed puffs, notices, and performance reviews. In the cases of the programs of music halls, pleasure gardens, and circuses, the playbills have generally been transcribed verbatim. The calendar for each season is preceded by an analytical headnote that presents several categories of information including, among other things, an alphabetical listing of all members of each company, whether actors, musicians, specialty artists, or house servants, who are known to have been employed at each venue. Limited biographical commentary is included, particularly about performers of Irish origin, who had significant stage careers but who did not perform in London. Each headnote presents the seasons's offerings of entertainments of each theatrical type (prelude, mainpiece, interlude, afterpiece) analyzed according to genre, including a list of the number of plays in each genre and according to period in which they were first performed. The headnote also notes the number of different plays by Shakespeare staged during each season and gives particular attention to entertainments of "special Irish interest." The various kinds of benefit performance and command performances are also noted. Finally, this Calendar of Performances contains an appendix that furnishes a season-by-season listing of the plays that were new to the London patent theatres, and, later, of the important "minors." This information is provided in order for us to understand the interrelatedness of the London and Dublin repertories.
Visa hela texten

John C. Greene is professor of English at the University of Louisiana, Lafayette.