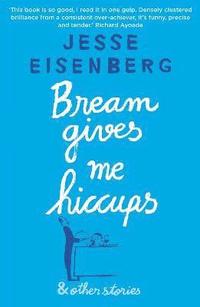 av Jesse Eisenberg
Häftad Engelska, 2016-06-02
124
Köp
Spara som favorit
Specialorder (osäker tillgång). Skickas inom 11-20 vardagar.
Gratis frakt inom Sverige över 159 kr för privatpersoner.
Finns även som
Visa alla 3 format & utgåvor
Bream Gives Me Hiccups: And Other Stories is the whip-smart fiction debut of Academy Award-nominated actor and star of The Social Network, Jesse Eisenberg. Known for his iconic film roles but also for his regular pieces in the New Yorker and his two critically acclaimed plays, Eisenberg is an emerging voice in fiction. Taking its title from a group of stories that begin the book, Bream Gives Me Hiccups moves from contemporary L.A. to the dormrooms of an American college to ancient Pompeii, throwing the reader into a universe of social misfits, reimagined scenes from history, and ridiculous overreactions. United by Eisenberg's gift for humour and character, and grouped into chapters that each open with an illustration by award-winning cartoonist Jean Jullien, the witty pieces collected in Bream Gives Me Hiccups explore what it means to navigate the modern world, and mark the arrival of a fantastically funny, self-ironic, witty and original voice.
Visa hela texten

Enter Mr. Eisenberg, whose same jittery on-screen energy seeps into the pages of this book. * The Wall Street Journal * Eisenberg writes with lancing wit about social misfits who are, perhaps, less insane than the worlds around them. * Sydney Morning Herald * Eisenberg has a great command of language... Skilfully plotted and both funny and moving. * Jewish Chronicle * Jesse Eisenberg's hysterical and exciting stories... Capture the ridiculous, inappropriate and tender relationships between single mothers and their children with an honesty that will bring tears of laughter to your eyes. * Heather O'Neill * Jesse Eisenberg is a deeply original comic voice. These stories are about the funniness, sadness, and strangeness of everyday life and they really made me laugh. * Roz Chast * I've been a fan of Jesse Eisenberg's plays for years and his prose is just as winning... Hilarious, poignant and at times so self-deprecating it makes me want to give Jesse a hug. He's taken decades of neurosis and spun it into comedy gold. -- Simon Rich Jesse Eisenberg writes with formidable intellect and verbal dexterity... You'll want to give his debut collection 2000 out of 2000 stars. -- Teddy Wayne A remarkable book by an immensely talented writer. -- Andy Borowitz Brilliantly witty, deeply intelligent, and just plain hilarious... -- Sherman Alexie It is when he writes more and jokes less that Eisenberg's prose really sings, leading you to hope he takes the plunge and writes a proper novel soon. But his thoroughly enjoyable debut will more than do for now. * Esquire * Eisenberg is truly a talented writer. Hilarious and poignant. * Entertainment Weekly * Tell your "Social Network!" The actor is writing a book. Move over, James Franco - Jesse Eisenberg is the newest young thespian to enter the writing ring. * USA Today * The latest literary star in the making is The Social Network's Jesse Eisenberg. * New York Observer * Eisenberg continues to deliver both considered humour and intelligent, conversational prose... a charming and clever collection. * Independent * He sure can act, and boy, can he write... Well observed, friskily written and a hoot. * Tatler * A witty writer. * Grazia * Eisenberg's humour is knowing, sardonic, wisecracking. * The Daily Telegraph * His debut collection of stories blends playfulness with whimsy. * Observer * Witty... undeniably smart and fun. * Heat * Satirical, compassionate - and full of shrinks. * Guardian * A sharp, witty collection of short stories about people who are disconnected from society... An acerbic 21st-century sketch show. * Financial Times * This collection is sharp, funny and also nerdy... Measured, cute and winning. Eisenberg navigates the insanities of modern life with self-deprecation and perfectly pitched irony. * Daily Mail * These short stories are all wonderfully original... funny and heartbreaking - sometimes in the same sentence... Terrific. * The Times * This book is so good, I read it in one gulp. Densely clustered brilliance from a consistent over-achiever, it's funny, precise and tender. * Richard Ayoade *

Jesse Eisenberg is an Academy Award-nominated actor. He is also a celebrated playwright: his first play was nominated for a Drama League Award and his most recent play The Revisionist played off-Broadway and starred Eisenberg and Vanessa Redgrave. He regularly writes for the New Yorker.