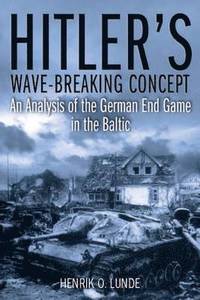 av Henrik O Lunde
Inbunden Engelska, 2013-08-21
271
Köp
Spara som favorit
Among the many controversies of World War II, prominent is the debate over Germany's strategy in the north of the Soviet Union, as the tide of war turned, and gigantic Russian armies began to close in on Berlin. In this long-awaited work, Henrik Lunde-former U.S. Special Forces officer and author of renowned previous works on the campaigns in Norway and Finland-turns his sights to the withdrawal of Army Group North. Providing cool-headed analysis to the problem, the author first acknowledges that Hitler-often accused of holding onto ground for the sake of it-had valid reasons in this instance to maintain control of the Baltic coast. Without it, his supply of iron ore from Sweden would have been cut off, German naval (U-boat) bases would have been compromised, and an entire sympatico area of Europe-including East Prussia-would have been forsaken. On the other hand, Germany's maintaining control of the Baltic would have meant convenient supply for forces on the coast-or evacuation if necessary-and perhaps most important, remaining German defensive pockets behind the Soviets'main drive to Europe would tie down disproportionate offensive forces. Stalwart German forces remaining on the coast and on their flank could break the Soviet tidal wave. However, unlike during today's military planning, the German high command, in a situation that changed by the month, had to make quick decisions and gamble, with the fate of hundreds of thousands of troops and the entire nation at stake on quickly decided throws of their dice. As Henrik Lunde carefully details in this work, Hitler guessed wrong. By leaving four entire battle-hardened armies in isolation along the Baltic, the Soviets pulling up to the Oder River encountered weaker opposition than they had a right to expect. Having economic (or aid) resources of their own they cared little for Hitler's own supply line and instead simply lunged at his center of power: Berlin. Once that was taken the remaining German pockets could be wiped out. The Germans deprived themselves of many of their strongest forces when they most needed them, and the climactic battle for their capital took place. In this book, both combats and strategy are described in the final stages of the fighting in the Northern Theatre, with Lunde's even-handed analysis of the campaign a reward to every student of World War II.
Visa hela texten

...the book is excellent...a detailed examination of one of the worst of Hitler's many bad decisions in the later years of the Second World War, and a valuable addition to the literature on the fighting on the Eastern Front. * HistoryofWar.org * In this book, both combats and strategy are described in the final stages of the fighting in the Northern Theater, with Lunde's even-handed analysis of the campaign a reward to every student of World War II. * AFV News * In sum, I am better educated for having read this book and I commend it to any reader interested in the background to the war on the Russian Front. * Army Rumour Service * Well written by an author who "knows his stuff" it covers a lot of ground and provides an overview of the consequences of not having a proper strategy * The War Gamer *

Henrik O. Lunde, born in Norway, moved to America as a child and thence rose in the U.S. Army to become a Colonel in Special Forces. Highly decorated for bravery in Vietnam, he proceeded to gain advance degrees and assume strategic posts, his last being in the Plans and Policy Branch of Supreme Headquarters, Allied Powers Europe. After retirement from the Army he turned to writing, with a focus on his native North, and given his combination of personal tactical knowledge plus objective strategic grasp has authored several groundbreaking works. These include Hitler's Pre-Emptive War, about Norway 1940, Finland's War of Choice, and Hitler's Wave-Breaking Concept, which analyzes the controversial retreat of Germany's Army Group North from the Leningrad front in WWII. In A Warrior Dynasty he re-examines the potential of pure military skill in global affairs. His next, long-awaited work, will examine how America itself has fared in this regard during the last 50 years.