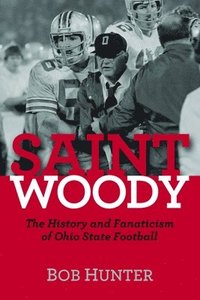 The History and Fanaticism of Ohio State Football

av Bob Hunter
Inbunden Engelska, 2012-08-31
393
Köp
Spara som favorit
Finns även som
Visa alla 2 format & utgåvor
The Ohio State Buckeyes have been a national story for decades, with numerous national championships and National Football League draftees to their credit. With such a successful history, it's no wonder that the passion for Ohio State football has reached a level of devotion that has religious overtones. Saint Woody: The History and Fanaticism of Ohio State Football is a Bill Bryson-style look at Ohio State football and the spiritual fanaticism that surrounds it. Bob Hunter tracks the development of this powerhouse program from its earliest days to its heights under Woody Hayes, the de facto king of Ohio State football. Hayes led the team to three national championships and a record of 205-61-10 over a twenty-eight-year period and was at the heart of the"Ten-Year War," a particularly intense period in the infamous Ohio State-Michigan rivalry. Hunter also looks at the present-day state of Buckeye football and their scarlet-and-gray clad followers, as well as their legion of detractors, who voted Ohio State as the "most hated" college team in a Yahoo! survey. America loves-and hates-a winner. Irreverent, honest, insightful, and always entertaining, Saint Woody will appeal to anyone whose spirit has ever lifted when hearing that famous cry,"Go Bucks!"
Visa hela texten

"Woody Hayes was bigger than life and remains so to many Ohio State fans. Bob Hunter, a perceptive and objective observer of the Buckeyes for more than three decades, also reveals the iconic coach, still revered a quarter century after his death, as so much more."--Rusty Miller, Ohio sports editor, Associated Press--Rusty Miller "Even the most expert of Buckeye fans will learn more about Ohio State football, Woody Hayes, and others connected to the great tradition than they knew before opening Bob's book!"--Paul Keels, play-by-play announcer, Ohio State-IMG Radio Network--Paul Keels "A big part of college football is the lore, and few schools are richer in it than Ohio State. In Saint Woody, veteran Columbus sports columnist Bob Hunter details the sung and unsung men, games, and controversies that make Buckeyes football a magnificent obsession for millions. If you ever wondered if Woody really went for two against Michigan 'because they wouldn't let me go for three' or how snowy was the Snow Bowl, this is the book for you."--Bill Livingston, sports columnist, Cleveland Plain Dealer--Bill Livingston

BOB HUNTER has been a sportswriter at the Columbus Dispatch for the last thirty-four years and covered Woody Hayes's last two years of coaching (1977-1978) as a football beat writer. He was voted best sports columnist in Ohio in 2009 by the Associated Press. The coauthor of The Buckeyes: A Story of Ohio State Football (Strode, 1982) and author of Chic: The Extraordinary Rise of Ohio State Football and the Tragic Schoolboy Athlete Who Made It Happen (Orange Frazer Press, 2008) and Buckeye Basketball (Strode, 1981), he lives in Westerville, Ohio.