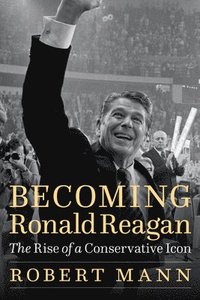 The Rise of a Conservative Icon

av Robert Mann
Inbunden Engelska, 2019-10-01
289
Köp
Spara som favorit
Skickas inom 10-15 vardagar.
Fri frakt inom Sverige för privatpersoner.
Ronald Reagan's political career has long been an interesting and important field of study for historians of the twentieth century. Just as interesting, however, is Reagan's life during the 1950s and early 1960s, his period of evolution from struggling film actor to respected political figure. In our current era, when a former reality television star with no prior political experience is president of the United States, such a feat may seem unremarkable. In the 1960s, however, transitioning from acting to politics was rare. Reagan was not the first to do it-his onetime film co-star George Murphy won a U.S. Senate seat from California in 1964-but he was the first actor to jump from the screen to the stump to immediate credibility as a presidential contender. Reagan's transformation from struggling liberal actor to influential conservative spokesman in five years-and then to the California governorship six years later-is a remarkable and compelling story. In this absorbing book, Bob Mann explores Reagan's early career: his growing desire for acclaim in high school and college, his political awakening as a young Hollywood actor, his ideological evolution in the 1950s as he traveled the country for General Electric, the refining of his political skills during this period, his growing aversion to big government, and his disdain for the totalitarian leaders in the Soviet Union and elsewhere. All this and more shaped Reagan's politics and influenced his career as an elected official. Mann not only delineates how Reagan the actor became Reagan the political leader and how Reagan the liberal became Reagan the conservative, but also further shows how the skills Reagan learned and lessons he absorbed during his political apprenticeship from 1954 to 1964 made him the inspiring leader so many Americans remember from the 1970s and 1980s.
Visa hela texten

Ronald Reagan took one of the most unconventional paths to the presidency in American history. Bob Mann tells this part of Reagan's remarkable story in lively, enlightening prose. Ronald Reagan evolved from rags to riches, liberal to conservative, and Democratic to Republican. But as Mann masterfully shows, Reagan's innate talents and personal genuineness were evident at each stage of his transformation into an icon who will never ride into the sunset for conservatives."" - Larry J. Sabato, director of the Center for Politics at the University of Virginia and author of The Kennedy Half-Century ""This typically excellent, highly original work from Robert Mann will emerge as the standard interpretation of Reagan's ideological evolution - and his development as a major political figure. Mann stresses both continuity in Reagan's belief system and recognition of the pre-gubernatorial era's importance. A must-read."" - Robert David Johnson, professor of history at Brooklyn College and the City University of New York Graduate Center and author of All the Way with LBJ: The 1964 Presidential Election

Robert Mann is a professor and holds the Manship Chair in Journalism at the Manship School of Mass Communication at Louisiana State University. He is the author of numerous books, including Daisy Petals and Mushroom Clouds: LBJ, Barry Goldwater, and the Ad That Changed American Politics, named as one of the best political books of 2011 by the Washington Post.

Illustrations Acknowledgements Introduction 1. My Heart Is a Ham Loaf 2. Mr. Norm is My Alias 3. Have You Ever Heard Him Talk? 4. An Ambassador of Good Will 5. That's the Way, Ron 6. Progress Is Our Most Important Product 7. He Had That Little Computer Up There 8. He Is No Mere Movie Glamor Boy 9. He Used to Be a Liberal 10. Operation Coffeecup 11. Of Course Bobby Kennedy Is Behind It 12. Have You Reregistered as a Republican Yet? 13. Which One Was the Candidate? 14. A Rendezvous with Destiny 15. Why Didn't Goldwater Talk Like That? 16. The Brightest Spot of the Dreary Campaign 17. The Voice of the Cubs Became the Great Communicator Epilogue: Ron, Would You Come Down? Works Cited Notes Index