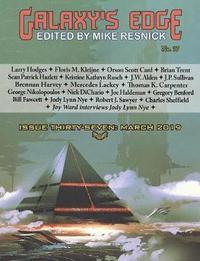 Galaxy?s Edge is a bi-monthly magazine published by Phoenix Pick, the science fiction and fantasy imprint of Arc Manor, an award winning independent press based in Maryland. Each issue of the magazine has a mix of new and old stories, a serialization of a novel, columns by Robert J. Sawyer and Gregory Benford, book recommendations by Bill Fawcett and Jody Lynn Nye and an interview conducted by Joy Ward.
Visa hela texten

the editor’s word by mike resnick

a fragment for father by floris m. kleijne

petra and the blue goo by kristine kathryn rusch

the star beneath the staircase by j.w. alden

you would make an excellent dictator by j.p. sullivan

the stylized unicorn escapes its poster in a seattle teenager’s bedroom by thomas k. carpenter

the lady who would not die by george nikolopoulos

the sin-eaters by nick dichario