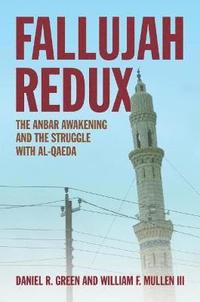 The Anbar Awakening and the Struggle with al-Qaeda

av Daniel R Green, F Mullen William
Inbunden Engelska, 2014-09-30
429
Köp
Spara som favorit
Skickas inom 10-15 vardagar.
Fri frakt inom Sverige för privatpersoner.
The city of Fallujah, Iraq will long be associated with some of the worst violence and brutality of the Iraq war. The battles to retake the city from insurgent fighters in 2004 have already indelibly carved its name into the historic annals of the U.S. military and occupy a revered place in the storied history of the United States Marine Corps. Initially occupied by U.S. forces in 2003, it eventually served as the headquarters for numerous insurgent groups operating west of Baghdad, including al-Qaeda in Iraq and its leader Abu Musab al-Zarqawi, until forcibly retaken at the end of 2004. Once the city was finally cleared, U.S. forces concentrated on trying to prevent it from returning to insurgent control by waging a counter insurgency campaign against both nationalist and extremist Islamist insurgent forces. It was a long, frustrating and, at times, brutal fight for control of the population with the eventual goal of setting the conditions for eventual Iraqi Government control and enabling U.S. forces to leave. Even though Coalition Forces were winning tactically, the initial policies of the Coalition Provisional Authority, which had deeply alienated the Sunni Arab population, negative press coverage of the ongoing violence, as well as the often clumsy and ineffective efforts of the developing Iraqi Security Forces served to make winning over the population a difficult process at best. The people of the area still strongly supported the nationalist insurgents and, although they often allied with the Islamists to push Coalition Forces out of Iraq, were frequently more terrified of the extremist Islamist insurgents than supportive. There seemed to be little U.S. forces could do to change the situation. By the middle of 2007, four years after the initial invasion of Iraq, the city of Fallujah and its surrounding countryside remained mired in a seemingly intractable cycle of violent action and counteraction between government security forces, assisted by U.S. forces, and the various insurgent groups. It was an unstable and chaotic time. It had even gotten to the point that some on the coalition side were beginning to wonder if Fallujah was being lost all over again. All of this began to change in 2007. Progress up to that point had been slow, difficult to assess, and occurred in fits and starts. The hardest aspect of the counter-insurgency effort was maintaining a sense of enduring security for the population so that Iraqis would not have to live in constant fear of retribution from the different insurgent groups. Lacking an adequate Iraqi partner, this task was beyond the resources of U.S. forces in Anbar Province - something needed to change. Beginning in June 2007, local security conditions in Fallujah were fundamentally altered due to a concerted U.S. pacification campaign in the city, increased cooperation from local tribes, and greater efforts by Iraqi Security Forces. This campaign took advantage of the tide of the Al Anbar Awakening Movement that was sweeping the province from west to east as the tribes in the area and the broader Sunni Arab community began to turn against al-Qaeda in 2006 and 2007. As this movement gained momentum, Fallujah's residents were waiting for it to push eastward in order to help them eliminate al-Qaeda from their own communities. Even though the local population had not yet risen up against the terrorist group, they were keen to do so and needed the help of U.S. forces. The campaign described in this book gave them this opportunity.
Visa hela texten

"Daniel Green and William Mullin's Fallujah Redux is a valuable installment in an emerging genre: the Iraq Surge memoir. Unlike the best previous studies of the Surge, which have centered on military planning and political processes within Multi-National Force, Iraq (MNF-I), this book recounts the experiences of two counterinsurgency practitioners at the tactical level of pacification. Fallujah Redux is an excellent starting place for both students and experts to learn about the Marine Corps' role in the 2007-8 pacification of Iraq, an uncommon example in post-1945 military history of America's ability to `do counterinsurgency." Michigan War Studies Review "Most of the books on the Surge focus upon Baghdad since it was the center of gravity for the war. Anbar however, was an important part of the campaign. Fallujah Redux provides important information on how that battle was fought through a combination of replicating the successful counterinsurgency tactics of Ramadi, and engaging the local tribes and government." - Musings on Iraq

Dr. Daniel R. Green is a Fellow at The Washington Institute for Near East Policy, USA. He served in Fallujah, Iraq with the U.S. Navy from April to October 2007 as a Tribal and Leadership Engagement Officer and is a Lieutenant Commander in the U.S. Naval Reserves. Brigadier General William F. Mullen III, USMC is a twenty-seven year Marine Infantry Officer whose experience with Fallujah began when he served there as the Operations Officer for a Marine Regimental Combat Team from 2005 to 2006, then as an Infantry Battalion commander in charge of the city for most of 2007.