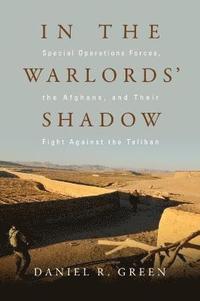 In the Warlords' Shadow

Special Operations Forces, the Afghans, and Their Fight Against the Taliban

av Daniel R Green
Inbunden Engelska, 2017-05-30
339
Köp
Spara som favorit
Skickas inom 5-8 vardagar.
Fri frakt inom Sverige för privatpersoner.
In 2010, U.S. special operations forces (SOF) in Afghanistan began a new and innovative program to fight the Taliban insurgency using the movement's structure and strategy against it. The Village Stability Operations/Afghan Local Police initiative consisted of U.S. Army Special Forces and U.S. Navy SEAL teams embedding with villagers to fight the Taliban holistically. By enlisting Afghans in their own defense, organizing the local populace, and addressing their grievances with the Afghan government, SOF was able to defeat the Taliban's military as well as its political arm. Combining the traditions of U.S. Army Special Forces with the lessons learned in the broader SOF community from years of counterinsurgency work in Iraq and Afghanistan, this new approach fundamentally changed the terms of the conflict with the Taliban. However, little has been written about this initiative outside of the special operations community until now. In this first-hand account of how the Village Stability Operations program functioned, Daniel R. Green provides a long-term perspective on how SOF stabilized the southern Afghan province of Uruzgan, the site of the Pashtun uprising against the Taliban in 2001 led by Hamid Karzai, future president of Afghanistan. In the Warlords' Shadow offers a comprehensive overview of how SOF adapted to the unique demands of the local insurgency and is a rare, inside look at how special operations confronted the Taliban by fighting a "better war" and in so doing fundamentally changed the course of the war in Afghanistan.
Visa hela texten

"In the Warlords' Shadow should be read as a call for reinvigorating Green's analysis, VSO as a holistic approach, and in determining whether VSO might be applied successfully to other contexts. The fact that Green describes an articulate and positive analytical construct for assessing Village Stability Operations is a positive outcome worth readers' time.... This book, more than anything, is a powerful reminder of the important need for sound approaches to operations that the United States must be better prepared to encounter in the future. Village Stability Operations demands continued study. In the Warlords' Shadow furthers that cause." --Terrorism and Political Violence "This book accurately describes why the 15-year effort of American nation-building in Afghanistan failed. Narrated in detail by an expert, this account will be studied by a generation of officers. For the civilians in our government, especially in the White House, it should be required reading." --Bing West, author of The Village and No True Glory: A Frontline Account of the Battle of Fallujah "In the Warlords' Shadow is a rare, insider's account into the Special Operations program Village Stability Operations which was so devastatingly effective against the Taliban insurgency in Afghanistan. Dan Green's on-the-ground perspective, as both a civilian and a member of the military, provides an insightful look into how Special Forces and SEALs eventually adapted their strategy to the unique demands of Afghan stability - in a sea of Special Operations memoirs, this one stands alone." -- Dick Couch, author of Always Faithful, Always Forward: The Forging of a Special Operations Marine and The Warrior Elite: The Forging of SEAL Class 228 "Dan Green's In the Warlords' Shadow delivers a vivid first-hand account of the liberation of the southern Afghan province of Uruzgan from Taliban rule. His book is a unique combination of a personal memoir, scholarly study and narrative history of the innovative 'Village Stability Operations' program he helped realize. Always engaging and often compelling, Green's work earns a place alongside counter-insurgency classics like Bing West's The Village and Stuart Herrington's Silence was a Weapon. No detached academic or armchair strategist, Dan Green offers the striking proposition that success in Afghanistan is actually possible, one valley and one village at a time." -- Dr. Kalev I. Sepp, former Green Beret and co-author of Weapon of Choice: U.S. Army Special Operations Forces in Afghanistan "In the Warlords' Shadow is a brilliant study of the intimate dynamics of the Afghan war, of its tribal elders, and militias and insurgents. . . . Part memoir, part reportage, and part analysis, this book is a masterpiece of local history and a crucial piece to the puzzle of understanding how to bring peace to Afghanistan."--Anand Gopal, No Good Men Among the Living: America, the Taliban, and the War Through Afghan Eyes "In the Warlords' Shadow is a riveting firsthand account of an important initiative by American Special Operations Forces to work with community leaders in Afghanistan and dramatically improve local security; it is impressively researched and written by an accomplished soldier and scholar." -- Gen. David Petraeus, USA (Ret.), former Commander, NATO International Security Assistance Force, and Commander, U.S. Forces Afghanistan, 2010-11 "Dan Green brings his considerable military expertise and knowledge of Afghanistan to reflect deeply on the Special Forces-led war in Uruzgan, deep in the heart of Taliban country. Green writes with great authority about this largely unknown conflict and his book is important for anyone who wants to understand how Special Forces work in the field and for those who want to better comprehend the tribal and political structures of southern Afghanistan."--Peter Bergen, United States of Jihad: Investigating America's Homegrown Terror

Bloggat om In the Warlords' Shadow

Daniel R. Green is a Defense Fellow at The Washington Institute for Near East Policy in Washington, D.C. He is a lieutenant commander in the U.S. Navy Reserve, has served in Iraq and Afghanistan, and received his PhD. in political science from George Washington University in 2012.