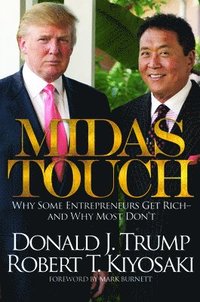 Why Some Entrepreneurs Get Rich-And Why Most Don't

av Donald J Trump, Robert T Kiyosaki
Inbunden Engelska, 2011-10-20
369
Bevaka
Spara som favorit
Tillfälligt slut – klicka "Bevaka" för att få ett mejl så fort boken går att köpa igen.
Finns även som
Visa alla 2 format & utgåvor
In Midas Touch, Donald Trump and Robert Kiyosaki ask the question: What's an entrepreneur's most important job? The answer: creating high-quality, stable jobs. And in today's marketplace, "jobs" are in high demand -- and so are the skills and the innovation and vision of entrepreneurs. In a world of high unemployment and an economy that needs new jobs to recover, who isn't hungry for a solution, something that will speed economic recovery? Many look to the government, but it's becoming more and more obvious that governments can't create real jobs. Trump and Kiyosaki believe that only one group can bring our world back to prosperity: Entrepreneurs. And, especially, entrepreneurs with the Midas Touch. This book is for people who are thinking of starting a business or who already have one and want to grow it. Midas Touch teaches how to leverage five key components that can impact success in business: Strength of character F.O.C.U.S. Brand Relationships Little things...that really count
Visa hela texten

Donald J. Trump, Chairman and President of The Trump Organisation, continually sets the standards of excellence while expanding his interests in real estate, sports and entertainment. From his role as star and co-producer of the NBC hit series The Apprentice and The Celebrity Apprentice to his award winning golf courses and skyscrapers, his business acumen is unparalleled. An accomplished author, Trump has authored over ten bestsellers and his first book, The Art of the Deal, is considered a business classic. Trump is the archetypal businessman - a deal maker without peer and an ardent philanthropist. Robert T. Kiyosaki, best known as the author of Rich Dad Poor Dad. Kiyosaki has challenged and changed the way tens of millions of people around the world think about money. He is an entrepreneur, educator and investor who believes the world needs more entrepreneurs. With perspectives on money and investing that often contradict conventional wisdom, Robert has earned a reputation for straight talk, irreverence and courage.