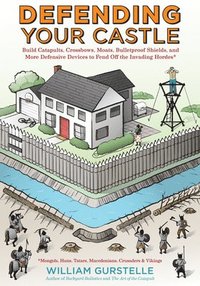 av William Gurstelle
Häftad Engelska, 2014-06-01
219
Bevaka
Spara som favorit
Bokens leverantör håller tillfälligt stängt på grund av Coronapandemin. Klicka "Bevaka" för att få ett mejl när boken går att beställa igen eller välj ett annat format nedan.
Finns även som
Visa alla 2 format & utgåvor
A man's home is his castle, or so the saying goes, but could it withstand an attack by Attila and the Huns, Ragnar and the Vikings, Alexander and the Greeks, Genghis Khan and the Mongols, or Tamerlane and the Tartars? Backyard Ballistics author William Gurstelle poses this fascinating question to modern-day garage warriors and shows them how to build an arsenal of ancient artillery and fortifications aimed at withstanding these invading hordes. Each chapter introduces a new bad actor in the history of warfare, details his conquests, and features weapons and fortifications to defend against him and his minions. Clear step-by-step instructions, diagrams, and photographs show how to build a dozen projects, including "Da Vinci's Catapult," "Carpini's Crossbow," a "Crusader-Proof Moat," "Alexander's Tortoise," and the "Cheval-de-frise." With a strong emphasis on safety, the book also gives tips on troubleshooting, explains the physics behind many of the projects, and shows where to buy the materials. By the time they've reached the last page, at-home defenders everywhere will have succeeded in creating a fully fortified home.
Visa hela texten

"You know that one book you're allowed to have on a desert island? Take this. You'll need it, if you're going to defend it!" -- Ziya Tong, host, Daily Planet "Ever feared that raging Viking or Mongol invaders are about to attack your home? Gurstelle eases those concerns with a perfect blend of history and how-to, from building a battering ram-proof door and a house-surrounding moat, to making an updated version of Da Vinci's catapult. I haven't felt this safe, or productive, in centuries." -- Mike Senese, Executive Editor, MAKE "Some designs lend themselves to science projects and would appeal to high school students as well as general readers. Practicality aside though, this book is a delight... readers will learn some military history while having a good time." -- Library Journal "A fascinating journey for historians and makers alike. Neither of these elements are too focused on, leading to a very balanced and fun read." --FactoryTwoFour "Gurstelle has done the research, so it isn't just the engineering but the history behind it that you take away... That's what separates this from a doomsday prepper's guidebook." --DoItYourself.com

William Gurstelle is the author of the best-selling 'Backyard Ballistics'. He is also a professional engineer and a technogeek robot builder. Gurstelle and his sons build and compete in the growing number of regional competitions with their own Tosca and Weber the Grillbot. He lives in Minneapolis, Minnesota.