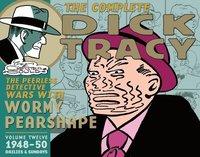 av Chester Gould
(1 röst)
Inbunden Engelska, 2011-10-25
329
Köp
Spara som favorit
Specialorder (osäker tillgång). Skickas inom 11-20 vardagar.
Fri frakt inom Sverige för privatpersoner.
Chief Brandon steps down, and wait 'til you see who's the new Chief! Then, Sam Catchem joins the force, Sparkle Plenty charms everyone, and two major characters tie the knot! And the villains? Well, Chester Gould continues to invent one grotesque, evil bad guy after another, as Wormy, Pearshape, Big Frost, Sleet, Talcum Freely, Sketch Paree, and Mousey make life miserable for Tracy and company. Plus, the first-ever color reprinting of "The Black Bag Mystery" which only appeared in a single newspaper in 1949! -The Library of American Comics is the world's #1 publisher of classic newspaper comic strips, with 14 Eisner Award nominations and three wins for best book. LOAC has become "the gold standard for archival comic strip reprints...The research and articles provide insight and context, and most importantly the glorious reproduction of the material has preserved these strips for those who knew them and offers a new gateway to adventure for those discovering them for the first time." - Scoop
Visa hela texten

Chester Gould (1900-1985) was born in Pawnee, Oklahoma, the son of a newspaperman and grandson of a circuit-riding preacher. He attended Oklahoma A&M (now Oklahoma State University) before transferring to Northwestern University in Chicago, from which he graduated in 1923. He produced the minor comic strips Fillum Fables and The Radio Catts before striking it big with Dick Tracy in 1931. Originally titled Plainclothes Tracy, the rechristened strip became one of the most successful and lauded comic strips of all time, as well as a media and merchandising sensation. He was twice accorded the "Cartoonist of the Year" Reuben Award by his peers. Gould continued to write and illustrate Dick Tracy until his retirement in 1977.