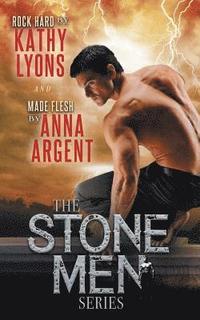 The Stone Men, Book One

To break the curse, each must find true love. But what modern woman believes in real magic? That statues can come to life? Or that the evil goddess Pyrenia will do anything to keep her playthings enslaved?

Book 1: ROCK HARD: Regency gentleman, Kane Addison, sacrificed himself for the family title only to discover true hell as a cursed slave of goddess Pyrenia. To break the curse, Kane must give one woman a moment of True Bliss. But after centuries of shagging, Kane discovers the truth: only true love breaks the spell. Now 200 years out of his own time and filled with despair, Kane must battle evil minions, selfish goddesses, and the lady's mother to win his beloved Jacqueline.

Book 2: MADE FLESH: After inheriting her uncle's statue of a hot, naked man, Sue Sullivan is shocked when it animates to save her from a brutal attack. Now cast into a magical world filled with warring goddesses, Sue strikes a bargain to give her stone man, Dalton Thatcher, a precious week of freedom. But what begins as a simple bargain is about to cost Sue and Dalton everything, if they can't outwit a goddess.
Visa hela texten