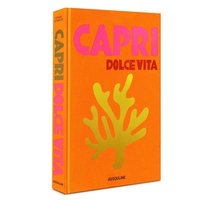 av Cesare Cunaccia
Inbunden Engelska, 2019-05-31
899
Köp
Spara som favorit
Skickas inom 3-6 vardagar.
Fri frakt inom Sverige för privatpersoner.
Capri, a resort island dating back to the height of the Roman Empire, has long been an extraordinary destination full of ancient charm. Cherished by everyone from physician Axel Munthe, who recommended its clean air to his patients as a cure for bronchitis; to film director Jean-Luc Godard as the setting for his 1963 film Contempt; to literary icons, celebrities, poets, and the jet set, Capri boasts a rich Mediterranean spirit and style that encompasses a wealth of beauty, from gardens to villas to caves to the people walking in the lively Piazzetta, where cars are prohibited and the island's playful attitude runs rampant. Capri Dolce Vita is a look at this fabled corner of the world through the ages and a celebration of paradise on earth. AUTHOR: Cesare Cunaccia is a writer, lecturer, curator, and journalist. He was editor at large for Vogue Italia and L'Uomo Vogue and the antiques consultant for Architectural Digest Italy. He has also contributed to the divisions of Architectural Digest in Germany, China, and Russia, as well as Connaissance des Arts, Opera magazine, and L'Oeil. Cunaccia has published a variety of books, particularly on the Italian artistic heritage, which have been translated into twelve languages. 200 illustrations
Visa hela texten