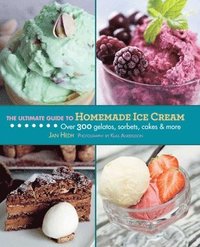 av Jan Hedh, Klas Andersson
Inbunden Engelska, 2012-08-30
240
Köp
Spara som favorit
Have you ever wondered what wine to pair with that scoop of ice cream? Master baker and chef Jan Hedh answers every ice cream related question you never knew you had in The Ultimate Guide to Homemade Ice Cream. This cookbook contains both basic and complex recipes for cold, creamy treats with flavors ranging from sweet to savory, including mango, avocado, truffle, asparagus, and mint chocolate chip. In addition, Hedh provides recipes for parfaits, semifreddo, cheesecake, and ice cream souffle. Hedh goes beyond the usual scoop by offering creative ideas for decorating desserts, having fun with sugar art, and even carving your own ice sculpture.
Visa hela texten

Jan Hedh is a champion pastry chef and baker with a love for ice cream. Even as a young pastry chef Hedh began combining all possible and impossible ice cream combinations to discover unique flavors. Hedh hails from Sweden, one of the largest ice cream devouring countries in the world. Swedes eat nearly 4 gallons of ice cream per person each year! Hedh shares his years of expertise in his title Ultimate Guide to Homemade Ice Cream touching on everything from tips for better flavors to how to make ice cream without an electric machine. Hedh resides in Sweden. Klas Anderson has years of broad experience as a photographer, having shot beautiful photographs for many of Jan Hedh's titles. Aside from food photography Anderson shoots for magazines and advertising and communications agencies. Anderson has also documented big infrastructure projects such as the construction of the Oresund Bridge and the City Tunnel in Malmo. Anderson resides in Sweden.