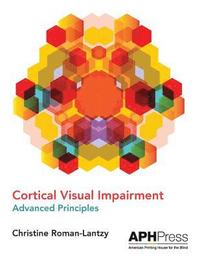 av Christine Roman-Lantzy
Häftad Engelska, 2019-01-03
829
Köp
Spara som favorit
Skickas inom 10-15 vardagar.
Fri frakt inom Sverige för privatpersoner.
Cortical Visual Impairment: Advanced Principles, the highly anticipated companion book to Cortical Visual Impairment: An Approach to Assessment and Intervention, makes new strides in building knowledge about CVI. The book, a collaboration among experts in several disciplines, dives deeper into topics that are extensions of the original concepts. CVI: Advanced Principles offers an in-depth examination of the needs of students and individuals with CVI in areas such as literacy, social skills, and O&M, while also addressing the demands of students with CVI and other disabilities, such as complex communication needs and hearing loss. The authors consider students with CVI in the context of their entire day to see how the tasks they perform, the interactions they have, and the environments they encounter can be evaluated and adapted to help them build their visual skills and experience success.
Visa hela texten

Christine Roman-Lantzy, PhD, is Director of the Pediatric VIEW (Vision Information and Evaluation
at West Penn Hospital) Program at Western Pennsylvania Hospital in Pittsburgh, and a private
consultant for Cortical Visual Impairment (CVI) Resources. A teacher of students with visual impairments, certified orientation and mobility specialist, and infant development specialist,
Dr. Roman-Lantzy has worked extensively in public schools and neonatal ICUs and NICU follow-up programs, where she collaborated with families, therapists, and physicians. She is the recipient of the 2008 C. Warren Bledsoe Award from the Association for Education and Rehabilitation of the
Blind and Visually Impaired for the first edition of Cortical Visual Impairment: An Approach to Assessment and Intervention, the first textbook to describe an educational methodology for evaluating the functional vision of students with CVI and offer a framework for intervention. Dr. Roman-Lantzy is also coauthor of the second edition of the Preschool Orientation and Mobility Screening and has contributed journal articles and book chapters on orientation and mobility, children with multiple disabilities, and visual assessment for infants and has presented lectures and workshops on CVI and consulted with organizations and educational teams across the United States and around the world. Together with the Perkins School for the Blind, she launched the Perkins-Roman CVIRange Endorsement, providing an opportunity for professionals to demonstrate expertise in the CVI Range framework. Since first working with children with CVI in the mid-1970s, Dr. Roman-Lantzy has assessed thousands of children with CVI and other visual impairments in a variety of settings and continues to be devoted to supporting families affected by CVI.

chapter 2 a path to literacy for students who have cvi

chapter 4 the ‘what’s the complexity?’ framework

chapter 5 cvi and the development of social skills

chapter 6 cvi and orientation and mobility

chapter 7 cvi and deafblindness: considerations for the cvi range assessment