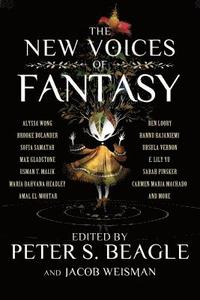 The New Voices of Fantasy

av Peter S Beagle, Jacob Weisman
Häftad Engelska, 2017-08-22
189
Köp
Spara som favorit
Skickas inom 5-8 vardagar.
Fri frakt inom Sverige för privatpersoner.
What would you do if a tornado wanted you to be its Valentine? Or if a haunted spacesuit banged on your door? When is the ideal time to turn into a tiger? Would you post a supernatural portal on Craigslist? In these nineteen stories, the enfants terribles of fantasy have arrived. The New Voices of Fantasy captures some of the fastest-rising talents of the last five years, including Sofia Samatar, Maria Dahvana Headley, Max Gladstone, Alyssa Wong, Usman T. Malik, Brooke Bolander, E. Lily Yu, Ben Loory, Ursula Vernon, and more. Their tales were hand-picked by the legendary Peter S. Beagle (The Last Unicorn) and genre expert Jacob Weisman (The Treasury of the Fantastic). So go ahead and join the Communist revolution of the honeybees. The new kids got your back.
Visa hela texten

A Booklist Top 10 Science Fiction/Fantasy title July-Aug 2017 Selected for the io9 August Reading List AGeekiverse 8 Hot Sci-fi and Fantasy Releases A Bookish Hot New Release [STARRED REVIEW] "A companion piece of sorts to Beagle's critically acclaimed anthology, The Secret History of Fantasy (2010)-a collection of stories that transcended the conventions and cliches of contemporary fantasy-Beagle and Weisman's latest contains 19 comparable stories from some of the genre's most innovative and exciting new voices.Although most of the authors included here may not be household names like the ones in the earlier collection (which featured works from Stephen King, Neil Gaiman, and Octavia E. Butler, among others), the quality of the stories is undeniable. Also undeniable is the impressive diversity of storylines, which range from the whimsy of Ben Loory's "The Duck," about a bird who falls hopelessly in love with a rock, to the horror of Carmen Maria Machado's Nebula Award-nominated "The Husband Stitch," a darkly lyrical and deeply disturbing look at a woman with a penchant for storytelling whose life becomes a twisted tale. E. Lily Yu's "The Cartographer Wasps and the Anarchist Bees" is particularly memorable. A political fable that works on multiple levels, it chronicles a conflict between a nest of imperialistic wasps and a colony of peaceful bees. A few young bees begin questioning the violent new world order and plot rebellion. Other standout selections include "Tornado's Siren" by Brooke Bolander, a love story featuring a tornado and a girl, and Alyssa Wong's Nebula and World Fantasy Award-winning "Hungry Daughters and Starving Mothers," which puts an innovative twist on the vampire mythos with a story about a young woman who, after realizing she can find sustenance consuming people's thoughts, becomes addicted to eating the darkest. While all 19 pieces are exceptional, the anthology's title is a bit of a misnomer; some stories were originally published as far back as 2012. A stellar anthology that proves not only that fantasy is alive and well, but that it will be for years to come." -Kirkus [STARRED REVIEW] "This excellent anthology showcases up-and-coming speculative fiction writers, many of whom have received award nominations and critical attention to support their status as future influencers of the genre. The anthology opens with Alyssa Wong's Nebula-winning "Hungry Daughters of Starving Mothers," a gripping story of creatures who walk among humans and feed on ugliness. The stories vary in tone: Amal El-Mohtar's "Wing" is lyrical, A.C. Wise's "The Practical Witch's Guide to Acquiring Real Estate" is gently humorous, and Carmen Maria Machado's "The Husband Stitch" is haunting. Some, such as E. Lily Yu's beautiful "The Cartographer Wasps and the Anarchist Bees," eschew the well-worn Western setting that is the English-language-fantasy default; others, such as Brooke Bolander's "Tornado's Siren," thoughtfully embrace their American and European settings. Fantasy legend Beagle and Tachyon publisher Weisman have provided a valuable snapshot of SF/F's newest generation of writers." -Publishers Weekly [STARRED REVIEW] "This anthology represents some of the most exciting and interesting work in the fantasy field today, and anyone interested in the genre should read it immediately." -Booklist "For readers who are anticipating the end of HBO's Game of Thrones and looking for new fantasy authors to follow, this 19-story-strong collection provides plenty to sample." -Library Journal "Delightful and discomforting, indelible and self-assured, the stories of [The] New Voices of Fantasy take our familiar old world and imagine it anew. In amongst the dancing buildings, lovelorn tornadoes, and domesticated vampires, we find our deepest truths dressed in fresh and unexp

Peter S. Beagle (editor) is the bestselling author of The Last Unicorn, which has sold over five million copies since its initial publication in 1968. His other novels include A Fine & Private Place, The Innkeeper's Song, Tamsin, Summerlong and In Calabria. His short fiction collections include The Rhinoceros Who Quoted Nietzsche, The Line Between, and Sleight of Hand. Beagle has won the Hugo, Nebula, Mythopoeic, and Grand Prix de l'Imaginaire awards and the World Fantasy Award for Lifetime Achievement. He lives in Richmond, California. Brooke Bolander is a short story writer who admits she "writes weird things of indeterminate genre." She is a self-professed admirer of Peter S. Beagle, and her stories have appeared in Lightspeed, Strange Horizons, and the anthology Aliens: Recent Encounters. She lives in Brooklyn. Nebula Award winner Amal El-Mohtar is a Canadian author of science fiction and fantasy and edits the poetry magazine Goblin Fruit. Her short story collection, The Honey Month, was published by Papaveria Press in 2011. She won the Locus Award in 2015 and three Rhysling Awards for her poetry. She has also been nominated for the World Fantasy and Aurora Awards. Her stories have appeared in Shimmer, Strange Horizons, Lackington's, Lightspeed, Uncanny, and The Starlit Wood. She lives in Ottawa. Eugene Fischer studied physics at Trinity University and is a graduate of both the Iowa Writers, Workshop and the Clarion Science Fiction and Fantasy Writers. Workshop in San Diego, His writing has appeared in Asimov's and Strange Horizons. His 2016 novella "The New Mother" won the James Tiptree, Jr. Award, was awarded 2nd place for the Sturgeon Award, and was nominated for the Nebula Award. He currently lives in Austin, Texas where he helped create a science fiction writing summer camp for children. Max Gladstone is the author of the Craft sequence, beginning with his debut novel, Three Parts Dead. He is the creator of the urban fantasy serial Bookburners and (with Lindsay Smith) The Witch Who Came in from the Cold. He has two novels forthcoming and is working on George R. R. Martin's Wild Cards anthology series. Gladstone was nominated for the John W. Campbell Award twice and has also been nominated for the Lambda and Mythopeic Awards. He lives in Somerville, Massachusetts. Maria Dahvana Headley is a New York Times-bestselling author, editor, playwright, and screenwriter. She is the author of four novels, a memoir, and co-edited the anthology Unnatural Creatures with Neil Gaiman. Her debut young adult novel, Magonia, came out in 2015. Her short stories have been finalists for the Shirley Jackson and Nebula awards, and have appeared in Lightspeed, Subterranean, Tor.com, Clarkesworld, Fantasy & Science Fiction, and Shimmer. A converted screenwriter, Ben Loory has published a collection of short stories, Stories for Nighttime and Some for the Day, and a children's book, The Baseball Player and the Walrus. He has an MFA in screenwriting and teaches at UCLA Extension. Loory has also appeared on This American Life. He lives in Los Angeles. Carmen Maria Machado has been published in numerous outlets Shimmer, The New Yorker, Granta, and The Paris Review and her stories have been in four best of the year anthologies. She has been awarded several writing fellowships and has been nominated for the Shirley Jackson, Nebula, and Calvino awards. Machado's first collection Her Body and Other Parties will be out in 2017. She lives in Philadelphia. Bram Stoker winner and Nebula nominated author Usman T. Malik is a Pakastani writer of speculative fiction. He has been published in Nightmares, Black Static, Strange Horizons, Tor.com, as well as in at least four best of the year anthologies. Malik led Pakistan's first speculative fiction writing workshop in Lahore. He lives in Florida. Sarah Pinsker is a singer/songwriter with three albums on various independent labels. She is a very prolific author of short

Table of Contents -Hungry Daughters of Starving Mothers - by Alyssa Wong -Selkie Stories are for Losers - by Sofia Samatar -Tornado's Siren - by Brooke Bolander -Left the Century to Sit Unmoved - by Sarah Pinsker -A Kiss with Teeth - by Max Gladstone -Jackalope Wives - by Ursula Vernon -The Cartographer Wasps and Anarchist Bees - by E. Lily Yu -The Practical Witch's Guide to Acquiring Real Estate - by A. C. Wise -The Tallest Doll in New York City - by Maria Dahvana Headley -The Haunting of Apollo A7LB - by Hannu Rajaniemi -Here Be Dragons' by Chris Tarry -The One They Took Before - by Kelly Sandoval -Tiger Baby - by JY Yang -The Duck - by Ben Loory -Wing -by Amal El-Mohtar -The Philosophers - by Adam Ehrlich Sachs -My Time Among the Bridge Blowers -by Eugene Fischer -The Husband Stitch - by Carmen Maria Machado -The Pauper Prince and the Eucalyptus Jinn - by Usman T. Malik