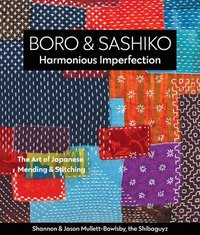 The Art of Japanese Mending & Stitching

While it may go against everything you've been taught, the ancient practices of boro and sashiko are all about learning to embrace imperfection. In this easy-to-follow guide, authors Shannon and Jason Mullett-Bowlsby offer stitching lessons that are true to traditon, inspired by the historical work of Japanese masters. There are nine projects to try your hand at, each with its own contemporary twist. You'll soon be raiding your scrap bin, eager to create more! * Sew Magazine *

Shannon Mullett-Bowlsby is the co-founder of Shibaguyz Designz and the Shibaguyz. Shannon is an award-winning designer with work that has appeared on the covers of US and international magazines, including: Interweave, Crochet!, Crochet Today, Inside Crochet, and Knitting Today. He teaches locally in the Pacific Northwest, USA and at national fiber festivals, such as Dallas Fort Worth Fiber Festival and the New York State Sheep and Wool Festival. Jason Mullett-Bowlsby is the other co-founder of Shibaguyz Designz and the Shibaguyz. A highly skilled photographer, Jason specializes in portrait, fashion and fiber arts photography. He has also worked as an event photographer for such prestigious events as the Westminster Kennel Club Dog Show in New York City, USA and the James Beard Foundation Taste America dinners.