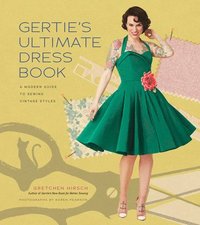 av Gretchen Hirsch
(5 röster)
Inbunden Engelska, 2016-03-08
224
Köp
Spara som favorit
Every vintage-obsessed sewist dreams of having a closet full of gorgeous dresses. The follow-up to the popular Gertie's New Book for Better Sewing and Gertie Sews Vintage Casual, Gertie's Ultimate Dress Book is packed with all the information and patterns you could ever need to create a wardrobe filled with stunning vintage frocks. The book begins with all the essential techniques for dressmaking and includes instructions and patterns for 23 dresses for a variety of occasions. Elements of each pattern can be mixed and matched, allowing readers to customise the bodice, skirt, sleeves, pockets and details of each dress for a truly unique creation.
Visa hela texten

Gretchen "Gertie" Hirsch is the author of Gertie's New Book for Better Sewing, Gertie Sews Vintage Casual, and Gertie's New Fashion Sketchbook. She is the creator of Gertie's New Blog for Better Sewing, one of the web's most popular sewing blogs. She has a pattern line with Butterick and a fabric line with Fabric Traditions, both sold at Jo-Ann stores throughout the United States and Australia. She teaches in-person workshops throughout the United States, as well as on television (PBS's It's Sew Easy) and the web (Craftsy.com and Creativebug.com).