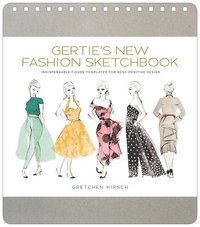 av Gretchen Hirsch
Inbunden Engelska, 2015-08-06
289
Köp
Spara som favorit
Skickas inom 7-10 vardagar.
Fri frakt inom Sverige för privatpersoner.
Being able to sketch is an essential part of fashion design and sewing; a good sketch shows the designer/sewist how a garment's proportion, style lines, and colours will work on the body. Most designers sketch their designs on top of "croquis," or pre- rinted body outlines. However, until now, the standard croquis for women have shown elongated, stick-thin, unnaturally proportioned, and off-balance bodies. In Gertie's New Fashion Sketchbook, loved house author and fashion-sewing celebrity Gretchen Hirsch teams up with illustrator Sun Young Park to reinvent the traditional croquis for the 21st century, with hundreds of croquis depicting realistically sized and proportioned body shapes in balanced, life-like poses. Also included are an overview of the design and sketching process and a visual history of garment component styles to empower designers/sewists to create sketches for ashion that will be flattering for women of all shapes and sizes.
Visa hela texten

Gretchen "Gertie" Hirsch is author of Gertie's New Book for Better Sewing (STC Craft, Autumn 2012), Gertie Sews Vintage Casual (Autumn 2014) and the upcoming Gertie's Ultimate Dress Book (Autumn 2016). She is the creator of one of the web's most popular sewing blogs, Gertie's New Blog for Better Sewing. She has her own pattern line with Butterick and a fabric line with Fabric Traditions. She teaches sewing around America on PBS's It's Sew Easy, on Craftsy.com, and on Creativebug.com. Her work has been featured in the magazines Sew Stylish, Vogue Patterns, Threads and Stitch, and on jezebel.com.