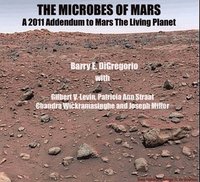 THE MICROBES OF MARS E-bok

A 2011 Addendum to Mars: The Living Planet

av Barry E Digregorio
E-bok (EPUB - DRM), Engelska, 2011-03-04
189
Ladda ned
Spara som favorit
Laddas ned direkt
Läs i vår app för iPhone, iPad och Android
Trying to understand why those in the NASA Mars Exploration program are intentionally side-stepping, ignoring and appear to have abandoned the most intriguing set of data about Mars ever obtained is a mystery in light of years of new evidence that seem to support its extraordinary findings - that there is life on Mars. It was in 1976 (35 years ago) that NASA sent the first and only true life detection experiments to Mars onboard the twin Viking Landers. One of these experiments, simply known as the Labeled Release experiment (LR) conducted a series of tests on samples of Martian soil nine times under different control conditions and got back strong evidence for microbial life. You would have thought when such evidence is found that every effort would be made to find out more about it by sending follow up missions with additional life science instruments. Yet no other life detection experiments have been sent and up to this day they have been forbidden or discouraged by the Mars Exploration program leaders. What possible explanation is there for this? In July of 1997 I published a book trying to resolve this question titled &quoteMars The Living Planet&quote. It was in this book that Gilbert V. Levin first announced his conclusion after years of scientific study trying to reproduce his results using only chemistry that he discovered living microorganisms in the soil of Mars. In August Levin presented a scientific paper about his conclusion to an astrobiology conference held by The International Society for Optical Engineering held in San Diego, California later in August (2). Yet, none at the Mars Exploration program office or any of its scientists took much notice. Mars The Living Planet laid out in detail the behind the scenes workings of being an astrobiologist within the NASA Mars Exploration program and some of what was reported is disturbing. While writing the book it became apparent to me that at the conclusion of the Viking Mission to Mars that NASA had put Levin and his life detection data on a shelf and they were not to be mentioned again. In &quoteThe Microbes of Mars - A 2011 Addendum to Mars The Living Planet&quote the reasons for NASA ignoring the Viking Labeled Release evidence are explored.
Visa hela texten