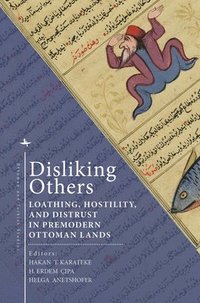 av Hakan T Karateke, H Erdem Cipa, Helga Anetshofer
Inbunden Engelska, 2018-08-30
1279
Köp
Spara som favorit
Skickas inom 7-10 vardagar.
Gratis frakt inom Sverige över 159 kr för privatpersoner.
Recent historical studies on the Ottoman Empire have taken for granted that subjects of the Ottoman polity flourished under a so-called "Pax Ottomanica." This edited volume probes the rosy narrative of Ottoman tolerance that has long dominated the discussions. The articles carefully strive to contextualize the many issues that sound like ethnic slurs, racial stereotyping, religious discrimination, misogyny and elitism to modern ears. The goal of the volume is not to prove that Ottoman society was a persecuting one, or that dislike or distrust was its defining characteristic, but to investigate the axes of tension, blemishes, and fractures in the everyday practice of coexistence in a dynamic, multi-religious, multi-confessional and multi-ethnic empire in which difference was the norm rather than the exception.
Visa hela texten

"Overall this volume thus proposes highly interesting visions of forms of hostility in Ottoman society between the sixteenth and the eighteenth century. ... The volume ... constitute[s] a major contribution ... as well as a precious entry towards an understanding of the tensions at work in Ottoman society." --Nora Lafi, Leibniz-Zentrum Moderner Orient, Berlin, Turkish Historical Review

Hakan T. Karateke is Professor of Ottoman and Turkish Culture, Language, and Literature at the University of Chicago. He earned his doctorate in Ottoman and Turkish Studies from Bamberg University, Germany and completed his habilitation in the same field at Vienna University. He is a cultural historian, and has published on Ottoman court ceremonies, historiography, and travelers. H. Erdem Cipa is Associate Professor of Ottoman History at the University of Michigan, Ann Arbor. He earned his doctorate in History and Middle Eastern Studies at Harvard University. The primary focus of his work is the history and historiography of the Ottoman Empire, with a specific emphasis on dissident movements and succession struggles. Helga Anetshofer (PhD, Vienna University 2001) is an Ottoman philologist by training, and her work focuses on Old Anatolian Turkish language and narrative literature. Her research interests also include women, gender and sexuality issues, as well as topics in cultural history as reflected in popular storytelling and epic romances.

Introduction Changing Perceptions about Christian-born Ottomans: Anti-Sentiments in Ottoman Historiography H. Erdem Cipa Circassian Mamluks in Ottoman Egypt and Istanbul, ca. 1500-1730: The Eastern Alternative Jane Hathaway Dispelling the Darkness of the Halberdier's Treatise: A Comparative Look at Black Africans in Ottoman Letters in the Early Modern Period Baki Tezcan The Jew, the Orthodox Christian, and the European in Ottoman Eyes, ca. 1550-1700 Bilha Moor An Ottoman Anti-Judaism Hakan T. Karateke Evliya Celebi's Perception of Jews Hakan T. Karateke Ambiguous Subjects and Uneasy Neighbors: Bosnian Franciscans' Attitudes toward the Ottoman State, 'Turks,' and Vlachs Vjeran Kursar 'Those Violating the Good, Old Customs of our Land': Forms and Functions of Graecophobia in the Danubian Principalities, 16th-18th Centuries Konrad Petrovszky Representing the Margins: The Many Faces of the 'Gypsy' in Early Modern Ottoman Discourse Faika Celik Gendered Infidels in Fiction: A Case Study on Sabit's Hikaye-i Hvce Fesad Ipek Huner-Cora 'The Greatest of Tribulations': Constructions of Femininity in Sixteenth-Century Ottoman Physiognomy Emin Lelic Defining and Defaming the Other in Early Seventeenth-Century Ottoman Invective Michael Sheridan 'Are You From Corum?': Derogatory Attitudes Toward the "Unruly Mob" of the Provinces as Reflected in a Proverbial Saying Helga Anetshofer