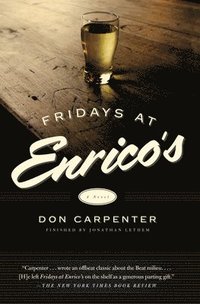 av Don Carpenter, Jonathan Lethem
Häftad Engelska, 2015-04-30
174
Köp
Spara som favorit
Don Carpenter was one of the finest novelists working in the west. His first novel, A Hard Rain Falling, first published in 1966, has been championed by Richard Price, and George Pelacanos who called it Â a masterpieceÂ the definitive juvenile-delinquency novel and a damning indictment of our criminal justice system," is considered a classic. His novel A Couple of Comedians is thought by some the best novel about Hollywood ever written.He was a close friend of Evan Connell and other San Francisco writers, but his closest friendship was with Richard Brautigan, and when Brautigan killed himself, Carpenter tried for some time to write a biography of his remarkable, deeply troubled friend.He finally abandoned that in favor of writing a novel. Friday's at Enricos, the story of four writers living in Northern California and Portland during the early, heady days of the Beat scene. A time of youth and opportunity, this story mixes the excitement of beginning with the melancholy of ambition, often thwarted and never satisfied. Loss of innocence is only the first price you pay. These are people, men and women, tender with expectation, at risk and in love, and Carpenter also carefully draws a portrait of these two remarkable places, San Francisco and Portland, in the 50s and early 60s, when the writers and bohemians were busy creating the groundwork for what came to be the counterculture.A great champion of Don Carpenter, Jonathan Lethem, has taken on the task of editing and developing this last draft into the shape we imagine Carpenter would have himself accomplished had he lived to see this through. And Lethem provides a wonderful introduction to this book, to Carpenter, and to the broad influence of his work which resonates until this very day.
Visa hela texten

"Carpenter...wrote an offbeat classic about the Beat milieu...he left Fridays at Enrico's on the shelf as a generous parting gift." Â New York Times Book Review"Not just a nostalgia trip into the counterculture, this work vividly recalls a time and place in forthright, engaging language." Â Library Journal"His writing, about Portland pool hustlers, lady-killing comedians, and drug-sniffing screenwriters, is as radiant and surprising now as it was the moment it was written [...] his love for the West Coast, for old movies and cold beer, and, above all else, for writing, suffuses every page." Â Grantland"Fridays at Enrico's captures the literary and social scene of Northern California in quick, knowing portraits."Â San Francisco ChronicleÂ I don't suppose I'll ever get over my friend Don Carpenter's tragic death, but it helps more than a little that as his legacy he left us his best book: Fridays at Enrico's." Â Curt Gentry, author of J. Edgar Hoover: The Man and the Secrets, Helter Skelter"Fridays At Enrico's may be the truest depiction of literary life I've ever encountered. Truer than Lost Illusions, truer thanNew Grub Street; Carpenter depicts the lives of his bohemians up and down the west coast with a kind of calm radiance, and with an equipoise between hope and despair. The result is a kind of stoic classic, like John Williams' Stoner. I can't recommend it highly enough."Â Matthew Specktor, author of American Dream Machine and The Sting"Like Chuck Kinder's Honeymooners, Fridays at Enrico's lovingly follows the literary fortunes of a ragtag band of West Coast hopefuls from their clumsy first drafts and drunken love affairs through bestsellerdom, writer's block and the Hollywood script mills. Don Carpenter knows how heartbreakingly funny the artist's peculiar unhappiness can be.' Â Stewart O'Nan, author of Last Night at the Lobster and Emily, Alone"The writer's life is a favorite subject for many authors, but Fridays at Enrico's is Don Carpenter from front to backÂ spare but unsparing, plain-spoken but filigreed with moments of bright poetry, and focused on ordinary people climbing out of the holes they're in only to dig deeper ones for themselves. Edited by Jonathan Lethem with a light and sympathetic touch, Carpenter's final novel is an unexpected treat."Â Christopher Sorrentino, author of Trance, Believeniks!, and American Tempura

Don Carpenter was born in Berkeley in 1932. Raised in Portland, he enlisted in the Air Force and returned to the Bay Area at the end of his service. He published ten novels during his lifetime, and he had a successful career as a screenwriter, living for long periods in Hollywood. After years of poor health he committed suicide in Mill Valley in 1995.