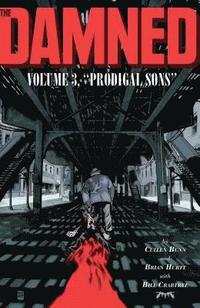 av Cullen Bunn, Brian Hurtt, Bill Crabtree
Häftad Engelska, 2019-02-26
199
Köp
Spara som favorit
Skickas inom 5-8 vardagar.
Fri frakt inom Sverige för privatpersoner.
THE DAMNED: PRODIGAL SONS, is the third volume of the fan-favorite series by the award-nominated creative team behind THE SIXTH GUN you won't want to miss! Years of playing every side in a world of Prohibition-era crime and violence spearheaded by demonic crime families, Eddie's unfortunate gift of never staying dead may have reached its limit. While he seeks out their mother in the afterlife, Eddie's cursed brother Morgan has tried to keep them both out of the hands of those are determined to make sure Eddie stays dead this time around.
Visa hela texten

Cullen Bunn is the writer of comic books such The Sixth Gun, Helheilm, and The Tooth for Oni Press. He has also written titles including Harrow County (Dark Horse), Uncanny X-Men, and Deadpool and the Mercs for Money (Marvel). Cullen claims to have worked as an Alien Autopsy Specialist, Rodeo Clown, Pro Wrestling Manager, and Sasquatch Wrangler. He has fought for his life against mountain lions and performed on stage as the World's Youngest Hypnotist. Buy him a drink sometime, and he'll tell you all about it. Brian Hurtt is an artist/writer who has spent most of his career working on collaborative creator-owned projects. His first such collaboration was in 2006 when Brian teamed with writer Cullen Bunn to create the Prohibition-era, monster-noir, cult classic, The Damned. A few years later the two teamed up again to create The Sixth Gun--a weird-west, epic supernatural fantasy. Brian also contributes to the popular webcomic Table Titans, in which he is the writer and artist of the stories "Whispers of Dragons" and "Road to Embers". Brian lives and works in St. Louis, Missouri. Bill Crabtree's career as a colorist began in 2003 with the launch of Image Comics' Invincible and Firebreather. He was nominated for a Harvey Award for his work on Invincible, and he went on to color the first 50 issues of what would become a flagship Image Comics title. He continues to color Firebreather, which was recently made into a feature film on Cartoon Network, Godland, and Jack Staff. Perhaps the highlight of his comics career, his role as colorist on the Oni Press series The Sixth Gun, and has since been described as "like Christmas morning, but with guns."