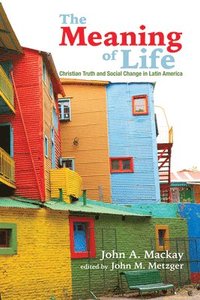 The Meaning of Life

av John A MacKay, John M Metzger
Häftad Engelska, 2014-03-06
289
Köp
Spara som favorit
Skickas inom 10-15 vardagar.
Fri frakt inom Sverige för privatpersoner.
Description:
Democratic principles have not taken root readily in Latin America in part because spiritual inwardness, a necessary prerequisite of democracy that is inseparable from the Bible, has been lacking. During the twentieth century Protestant workers like John Mackay (1889-1983) brought the evangelical message to that continent through lectures and writings.

This collection of John Mackay's early essays presents a range of his contributions, and the ideas in the essays are grounded in his clear understanding of the nature and dignity of human beings in the light of God. The fruit of this teaching is self-confidence, courage, steadfastness, and other positive ethical attributes that accompany progress and success for individuals and peoples. The essays touch on religious, educational, literary, political, and philosophical themes in the service of Christian truth. They embody key ideas and strategic judgments related to the presentation of the Evangel, the most basic and first work of the church. The message balances spiritual and social aspects of Christianity to meet the needs of the people, and it accompanied progressive social and political changes in the region.

The historical experience of Protestantism in Latin America is well worth recalling today by readers in North America and elsewhere.
Visa hela texten

Bloggat om The Meaning of Life