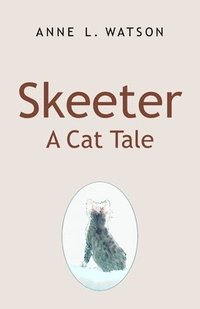 av Anne L Watson
Häftad Engelska, 2017-01-17
149
Köp
Spara som favorit
Skickas inom 10-15 vardagar.
Gratis frakt inom Sverige över 159 kr för privatpersoner.
Finns även som
Visa alla 1 format & utgåvor
"Dealing with a dog, to put it crudely, is like dealing with a person who's a bit dumb. Dealing with a cat is like dealing with a person who's more than a bit crazy." When a stray kitten romps into Lynne's life, she has no idea what she's getting into. As Lynne describes in letters to her friend Angie, Skeeter is all cat -- high-spirited, contrary, and inventive. He's so goofy that he reminds Lynne of her own nuttiest escapades; so irrepressible that even Lynne's neighbor, Mark, gets wound around his paw. And when Angie visits to see Skeeter for herself . . . Well, no one who meets Skeeter will ever be quite the same again. ///////////////////////////////////////////////// ABOUT THE AUTHOR Anne L. Watson, a retired historic preservation architecture consultant, is the author of numerous novels, plus books on such diverse subjects as soapmaking and baking with cookie molds. A former resident of San Pedro, California -- the setting of "Skeeter" -- Anne currently lives in Friday Harbor, Washington, with her husband and fellow author, Aaron Shepard. ///////////////////////////////////////////////// SAMPLE January 29, 2000 Dear Angie, Skeeter is not entirely happy about the way we live. For example, he doesn't like my going to work. With more justification, he disapproves of some of my attitudes. Most of my experience with animals is with dogs. In a relationship with a pet, I elect myself pack leader. Cats are not pack animals. Skeeter, a democrat, considers us equals and resents my bumptious ways. This is particularly true when it comes to food. I buy various kinds of food for Skeeter so he won't become too set on one type or flavor. I had a friend in high school whose cat, Sparkles, would eat nothing but Kitty Queen Tuna. No other brand would do, even people tuna. Kitty Queen Salmon would not do, either. My friend's family had Kitty Queen Tuna crises, when none could be found. "Did you try the all-night drugstore?" "We went there last time, remember? They don't have it." The cat probably would have starved before it ate anything else. My friend's mother had a strange relationship with the cat. She believed Sparkles to be the reincarnation of her own mother, long deceased. So the cat ruled the household. I am not going down that road with Skeeter. A gauntlet has been thrown, though, regarding turkey. Till last week, he ate it with obvious enjoyment. The two cans I've given him this week have gone untouched. Someone said it might be spoiled, that I should smell it. A longtime vegetarian, I think meat always smells spoiled, but I gave it a whiff. Disgusting, but not rancid. I won't buy it again, though, if he feels that way. This morning he got beef, which he accepted. In fact, he made a pig of himself. After breakfast he returned to the bedroom, belching alarmingly. "Would Monsieur like a potato with the steak next time?" I asked. "Perhaps a small glass of red wine?" Monsieur looked interested. "A salad?" No sale. I think I'll continue being pack leader. Like all despots, I perpetuate Skeeter's servitude by monopolizing the means to freedom: the checkbook, the car keys, the can opener. &nb
Visa hela texten