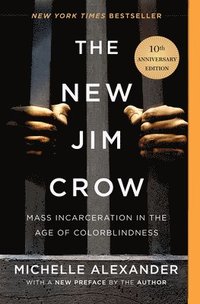 Mass Incarceration in the Age of Colorblindness

av Michelle Alexander
Häftad Engelska, 2020-07-23
168
Köp
Spara som favorit
Finns även som
Visa alla 1 format & utgåvor
Seldom does a book have the impact of Michelle Alexander's The New Jim Crow. Since it was first published in 2010, it has been cited in judicial decisions and has been adopted in campus-wide and community-wide reads; it has been the winner of numerous prizes, including the NAACP Image Award; and it has spent nearly 250 weeks on the New York Times bestseller list. Most important of all, it has spawned a whole generation of criminal justice reform activists motivated by Michelle Alexander's unforgettable argument that 'we have not ended racial caste in America; we have merely redesigned it.'
Visa hela texten

"Devastating. . . . Alexander does a fine job of truth-telling, pointing a finger where it rightly should be pointed: at all of us, liberal and conservative, white and black."--Forbes "Alexander is absolutely right to fight for what she describes as a 'much-needed conversation' about the wide-ranging social costs and divisive racial impact of our criminal-justice policies."--Ellis Cose, Newsweek "Invaluable . . . a timely and stunning guide to the labyrinth of propaganda, discrimination, and racist policies masquerading under other names that comprises what we call justice in America."--Daily Kos "Many critics have cast doubt on the proclamations of racism's erasure in the Obama era, but few have presented a case as powerful as Alexander's."--In These Times "Carefully researched, deeply engaging, and thoroughly readable."--Publishers Weekly "[Written] with rare clarity, depth, and candor."--Counterpunch "A call to action for everyone concerned with racial justice and an important tool for anyone concerned with understanding and dismantling this oppressive system."--Sojourners "Undoubtedly the most important book published in this century about the U.S."--Birmingham News "During the past decade, no single book was more directly responsible for reshaping how the American public understands race and mass incarceration than Michelle Alexander's The New Jim Crow."--Carolyn Copeland, Daily Kos "[The New Jim Crow] took the academy and the streets by storm, and forced the nation to reconsider the systems that allowed for blatant discrimination."--The Chronicle of Higher Education

Michelle Alexander is a highly acclaimed civil rights lawyer, advocate, and legal scholar. She is a former Ford Foundation Senior Fellow and Soros Justice Fellow, has clerked for Supreme Court Justice Harry Blackmun, and has run the ACLU of Northern California's Racial Justice Project. Alexander is a visiting professor at Union Theological Seminary and an opinion columnist for the New York Times. She lives in Columbus, Ohio.