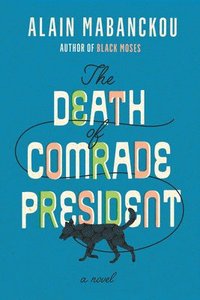 The Death of Comrade President

av Alain Mabanckou
Inbunden Engelska, 2020-09-17
239
Köp
Spara som favorit
Skickas inom 7-10 vardagar.
Fri frakt inom Sverige för privatpersoner.
Kan levereras innan jul!
Finns även som
Visa alla 3 format & utgåvor
A poignant and riotous tale of family and revolution in postcolonial Africa, from the winner of the French Voices grand prize and finalist for the Man Booker International Prize Pointe-Noire, a bustling port town on Congo's southwestern coast, is host to Alain Mabanckou's astonishing cycle of novels that is already being hailed as one of the grandest, funniest fictional projects of our time. His novels have been twice short-listed for the Man Booker International Prize and have been described as "beautiful" (Salman Rushdie), "brutally satiric" (Uzodinma Iweala), containing "fireworks on every page" (Los Angeles Review of Books), and "vividly colloquial, mischievous and outrageous" (Marina Warner) . Mabanckou's riotous new novel, The Death of Comrade President, returns to the 1970s milieu of his awarding-winning novel Black Moses, telling the story of Michel, a daydreamer whose life is completely overthrown when, in March 1977, just before the arrival of the rainy season, Congo's Comrade President Marien Ngouabi is brutally murdered. Thanks to his mother's kinship with the president, not even naive Michel can remain untouched. And if he is to protect his family, Michel must learn to lie. Moving seamlessly between the small-scale worries of everyday life and the grand tragedy of postcolonial politics, Mabanckou explores the nuances of the human soul through the naive perspective of a boy who learns the realities of life--and how much must change for everything to stay the same.
Visa hela texten

Praise for The Death of Comrade President "At once charming and disquieting. . . . A country's fraught history comes vividly to life through a child's eyes." --Kirkus Reviews "The Death of Comrade President is a glorious, funny, surreal novel, set in communist Congo-Brazzaville in the 1970s. It is also a profound study of tyranny and individual choice." --Financial Times "An imposing tale of colonialism in the turbulent Congo of the 1970s." --The Independent "Mabanckou's storytelling thrives in the gulf between the familiar kid troubles that preoccupy the protagonist and the dead-serious political danger. Here's a charming coming-of-age narrative, complete with crushes and innocent secrets kept from parents, artfully corrupted by the Communist propaganda Michel's been fed his whole life." --Shelf Awareness "Nicely and quite cleverly turned, The Death of Comrade President is a fine novel, poignant--with a very light touch--but also quite amusing, and vividly evocative." --M.A. Orthofer, The Complete Review

Alain Mabanckou was born in Congo in 1966. An award-winning novelist, poet, and essayist, Mabanckou currently lives in Los Angeles, where he teaches literature at UCLA. He is the author of African Psycho, Broken Glass, Black Bazaar, Tomorrow I'll Be Twenty, The Lights of Pointe-Noire and Black Moses. In 2015, Mabanckou was a finalist for the Man Booker International Prize.