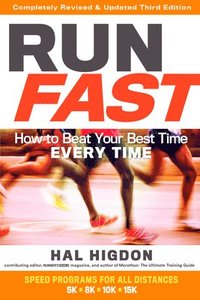 How to Beat Your Best Time Every Time

av Hal Higdon
Häftad Engelska, 2016-10-04
249
Köp
Spara som favorit
Finns även som
Visa alla 1 format & utgåvor
Building off of the success of the two previous editions of Run Fast, this revised third edition features new information and expertise from one of the most well-known authorities in running. Hal Higdon teaches runners how to improve their speed, regardless of their age or ability or the distance. Run Fast is the ultimate guide for runners to maximise their potential without merely running faster. Training programs and tables are expanded and revised to include up to date information with emphasis on motivational and practical support for novice runners. New material includes developments on running form, strategies for running longer distances faster, a new chapter on the importance of rest, how to knowledge for beginners entering their first race, and advice from the leading scientists and experts in the field. The book also includes Higdon's new 30/30 plan for beginners, which involves walking and/or running for 30 minutes for 30 days. Higdon believes that once the 30/30 plan is completed, readers are ready to tackle a 5K. The book also includes a modified and easier version called the 30/60 plan.
Visa hela texten

Hal Higdon has contributed to Runner's World for longer than any other writer: an article by him appeared in the second issue in 1966. Author of 36 books, Higdon has written books on many subjects and for different age groups. He has run 111 different marathons and holds a personal best of 2:21:55. He ran in the Olympic Trials eight times and won four world masters championships. He has served as training consultant for the Chicago Marathon and Chicago Area Runners Association and also answers questions on his Virtual Training Bulletin Board, offering interactive training programs through TrainingPeaks. Higdon lives in Long Beach, Indiana.