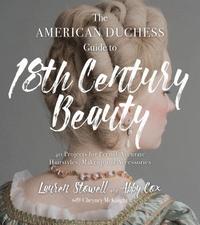 av Lauren Stowell, Abby Cox
Häftad Engelska, 2019-07-09
212
Köp
Spara som favorit
Finns även som
Visa alla 1 format & utgåvor
The American Duchess Guide to 18th Century Dressmaking was met with incredible success and received a starred review in Library Journal. Though their first book was geared towards advanced seamstresses, Lauren and Abby's new guide is beginner-friendly, with no prior sewing knowledge required - perfect for history enthusiasts who want to learn more about 18th century beauty, as well as seasoned costumers who want to complete their looks in authentic 18th century style. Whether readers hand sew their own gowns or buy historical costumes, they can learn how to complete the look with hairstyle tutorials that break down these elaborate updos into easy-to-follow steps, makeup recipes and application directions, and simple sewing projects like caps and other hair accessories. Each of the 40 projects features step-by-step photos to help readers get the perfect results. Lauren and Abby are incredibly involved in the historical costuming community. In 2011, Lauren founded American Duchess, a popular online store that specializes in historically accurate shoes. Their shoes and accessories have been used in productions all over the world, including ABC's Once Upon a Time, Starz's Outlander and American Gods, Broadway's Hamilton: An American Musical, Dangerous Liaisons and Cinderella.
Visa hela texten

Lauren and Abby are the owners of American Duchess Inc., which has been providing historically accurate lady's shoes since 2011. Their shoes and accessories have been used in productions all over the world, including ABC's Once Upon a Time, Starz's Outlander and American Gods, and Broadway's Hamilton: An American Musical. Their shoes have also been used by the New York Metropolitan Opera, Ford's Theater and have walked the red carpet at the Academy Awards. They live in Reno, Nevada.