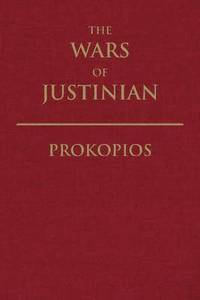 The Wars of Justinian

"[A] fluent and accurate rendering of an often complex text . . . of central importance to late Roman and Byzantine history. Prokopios will finally take his rightful place alongside historians of the ancient world such as Thucydides and Polybius." --John F. Haldon, Princeton University "Kaldellis is a gifted translator and a talented historian. . . [His] introduction situates the Wars very well, summarizing the latest scholarship, much of it Kaldellis'own. Kaldellis writes with authority on the author, his writings, and the armies of Justinian; he also directs the reader to the classical authors--Thucydides, Herodotus and Xenophon--whose methods and works shaped Procopius'narrative and from which he chose templates to structure his set pieces, most famously an account of the plague of 542. This is an impeccable work of the greatest value. Its many maps are superb. It will certainly be used by scholars, even those with good Greek, for its copious erudite notes, both historical and literary. Most impressive are the countless references to classical sources, making this also an elucidation of Byzantine learning in the sixth century." --Paul Stephenson, Radboud University Nijmegen "I used a pre-publication version of Anthony Kaldellis's translation of Prokopios' Wars last spring for my class at Georgetown on the reign of Justinian. We read the whole translation cover to cover, and the students benefitted greatly from having a single handy volume of the Wars (vs. having to buy all the Loebs or, worse, an abridged translation). Our unanimous conclusion in the class was that Kaldellis's translation is accurate, readable, and authoritative. The notes are invaluable helps to understanding the details of the more technical sections, especially in their lucid explanations of the warfare, geography, and complex political machinations of the late Roman state. One great benefit of Kaldellis, over the Dewing translation, is that he sees clearly the elements of the Wars that could be stumbling blocks for students. He focuses his notes on what is most important to know so that they can read with fluency one of the great histories of the ancient world. Kaldellis obviously cares deeply, based on years of teaching experience, that students actually enjoy Prokopios, as much students in past generations have enjoyed Herodotus and Thucydides. In other words, Kaldellis's translation puts Prokopios in his rightful historiographical company within the classroom. The maps are masterful and serve as a necessary and elucidating complement to the translation. Likewise, the diagrams of battles, crisp in-text images (of coins and monuments), and the lavish appendices, with genealogies and chronological lists of rulers, fill this volume to the brim with useful tools for both teacher and student. The index is also remarkably copious and detailed. All in all, this is a volume that is specifically designed, by a master of the discipline, to inspire students to relish Late Antiquity and Byzantium. I can think of no better single translation to hook readers on the captivating world of late antique historiography and, especially, on Prokopios as its most talented exemplar." --Scott Johnson, Georgetown University

Bloggat om The Wars of Justinian

Anthony Kaldellis is Professor of Greek and Latin, The Ohio State University.