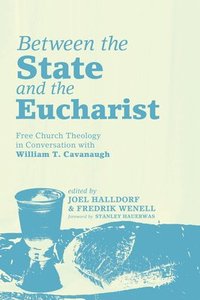 Between the State and the Eucharist

av Joel Halldorf, Fredrik Wenell
Häftad Engelska, 2014-07-23
240
Köp
Spara som favorit
Skickas inom 10-15 vardagar.
Gratis frakt inom Sverige över 159 kr för privatpersoner.
Finns även som
Visa alla 1 format & utgåvor
In the world, but not of the world--this has been the motto of the Free Church tradition. But to what extent can freedom and independence from the world be realized in modernity, and how have these churches fared so far? These are the questions with which this book wrestles. The particular focus is Sweden, where a state-facilitated hypermodernity has created what some call the most modern nation in the world. The Swedish free churches have in many ways succumbed to the pressure of the modern welfare state and as a consequence lost their distinctive voice.
The argument of this book is that the rediscovery of practices left behind might be a way for these churches to recover a solid, particular, and deeply Christian identity. In dialogue with William T. Cavanaugh, the authors argue for a return to concrete, social practices: asceticism, table grace, written prayers, a turn to tradition, and the Eucharist. Here are lost treasures that might prove invaluable for the modern church at large, with her dual citizenship in the modern nation-state and the kingdom of heaven.

There are indeed significant differences between the ecclesial situation in Scandinavia and in the United States as there are differences between a Free Church ecclesiology, a Lutheran State Church ecclesiology, and a Roman Catholic ecclesiology. All the more reason then to undertake a critical engagement across these boundaries for mutual enlightenment. Between the State and the Eucharist accomplishes this task beautifully when some of the most constructive contemporary Scandinavian theologians encounter the American Catholic theologian William T. Cavanaugh. Important reading for anyone not content with how the church stands in modernity but hoping for a more visionary Christianity, both here and there.
--Ola Sigurdson, Professor of Systematic Theology, Centre for Culture and Health, University of Gothenburg, Sweden

This important collection of essays provides an in-depth analysis of the relationships between modernity, the secular state, the state church, and non-state churches in Sweden. The results are provocative, placing in stark relief both the Christian contribution to the modern nation-state and the resulting debate over competing forms of belonging and identity. The challenge is to cultivate richer analyses of Christian practices, like Eucharist, by placing on the broader foundation of Christian tradition, the identity of the 'communio sanctorum' through time.
--Dale M. Coulter, Associate Professor of Historical Theology, Regent University School of Divinity, Virginia Beach, VA

While the passing of state-established churches is reason to celebrate, Christians are facing new challenges as they inhabit cultures that have been inoculated by weakened strains of state-supported religion. With the future of a post-Christendom era now all but certain, Christians must learn anew to practice the faith without privilege. This remarkable collection of essays explores how the Free Chur...
Visa hela texten