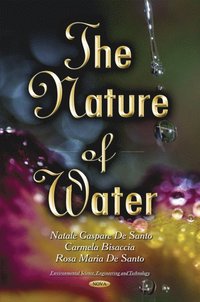 av Natale Gaspare De Santo, Carmela Bisaccia, Rosa Maria De Santo
E-bok (PDF - DRM), Engelska, 2013-12-01
2929
Ladda ned
Spara som favorit
Laddas ned direkt
Läs i vår app för iPhone, iPad och Android
Water, the most represented substance in the human body, is a trace of the primordial sea where life originated. Its virtues may be represented by the Venus of Botticelli coming out from the sea, as well as by Velasquez's water seller and by Aristophanes' chant of the clouds. Water has been connected with medicine from time immemorial and is a common good. For Sumerians, the physician was the man who new water. Homer's (850-750 BC) mythical tradition made Ocean and Thetys progenitors of all gods and of the world. Hesiod (ca. 700 BC) chanted Poseidon, the sea-lake god, who could cause tempests and seaquakes, generate springs, and also confer the power to walk on water like on earth. In the last century, at the time of the cold war, the information was generated in Moscow about the discovery of polywater, a new form of water, which could be produced in tiny drops in very thin tubes. Astonishingly it boiled at 200 A(deg)C and had an initial freezing point of around -30 A(deg)C. Polywater was a case for concern among states because of its potential capability to pollute normal water. Finally it was demonstrated that it was just an artefact due to contamination. Jacques Benveniste, a French immunologist of good reputation came to the conclusion that water saved the memory, being imprinted like a cast. However stringent experiments performed at suggestion of the Editor, showed that water could not act as a template for its molecule.
Visa hela texten