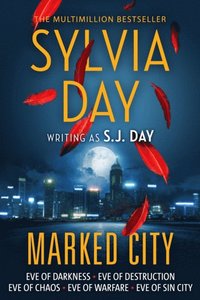 av Sylvia Day, S J Day
E-bok (EPUB - DRM), Engelska, 2019-08-06
259
Ladda ned
Spara som favorit
Laddas ned direkt
Läs i vår app för iPhone, iPad och Android
From the #1 Sunday Times bestselling author Sylvia Day (writing as S. J. Day) comes the Marked series, starting with Eve of Darkness. This urban fantasy series follows Evangeline Hollis, a heavenly bounty hunter, who's cursed by God, hunted by demons, and desired by none other than Cain and Abel. Uncontrollable bloodlust, dark and sexy desires, disasters of biblical proportions... S. J. Day's epic series has it all and is not to be missed.Eve of Darkness - Years ago, Evangeline Hollis spent a blistering night with a darkly seductive man she can't forget. Now Eve is thrust into a world where sinners are marked and drafted to kill demons. Her former one-night stand, Cain, is now her mentor-and his equally sexy brother Abel is her new boss.Eve of Destruction - When Eve's training class takes a field trip to an abandoned military base, things take a dark turn. Meanwhile, her body is still adapting to her new abilities and the challenges that came with them-such as uncontrollable bloodlust...which seems to be inciting another kind of lust altogether.Eve of Chaos - Eve runs over Satan's hellhound during training, so he puts a bounty on her head, and every demon in the country wants to deliver. Meanwhile, as Cain's role in Eve's life becomes more and more uncertain, Abel doesn't hesitate to step in.Eve of Warfare - Eve knows when she's being used as a pawn in the celestial political game. Now, she just has to figure out who's the greater threat: the vampire she's hunting, the cherub yanking her chain, or the two brothers vying to play the role of her spouse-'til death do them part. Which in her line of work, could happen any minute...Eve of Sin City - Sin City-Las Vegas-is home to humans and Infernals of all sorts: the good, the bad, and the ugly. If you ask Evangeline Hollis, &quotegood&quote is in short supply, &quoteugly&quote might be amusing, but &quotebad&quote is most definitely her business.
Visa hela texten